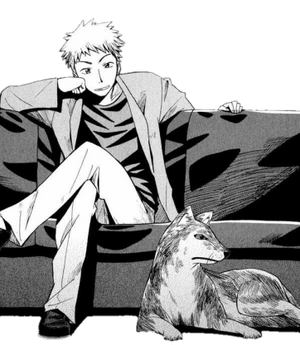 Shinonome Hangetsu is the second knight to be introduced and is also one of the most powerful. In battle, he is far more skilled than Amamiya or Asahina. He introduces himself as a "Ally of Justice" and behaves very much like a cliche superhero, often diving in last minute to save the day. He grew up in a dojo with his younger brother Shinonome Mikazuki, and his father.

Origin: Lucifer and The Biscuit Hammer

Classification: The Dog Knight, One of The Beast Knights.

Powers and Abilities: Superhuman Physical Characteristics, Martial Arts (Is a master of the ancient fighting arts), Enhanced Senses, (Could sense Yuuhi's Bloodlust), Instinctive Reactions (Was using only his extinct when fighting yuuhi), Possibly Limited Air Manipulation (Was able to blown away thugs), Flight, Energy Manipulation, Forcefield Creation, Telekinesis, Weapon Creation (with Domain Control; as a Beast Knight, Hangetsu has his domain control - a sphere that is made up from energy directly from the user's body, it can be manipulate in various ways to create a shield, levitate, and control things telekinetically. a very powerful spear that can even pierce a golem's flesh.), Power Bestowal & Limited Reality Warping (with Wish granting, Hangetsu wished that his martial art skills will be passed onto Yuuhi, Only works once)

Attack Potency: At least Small Building level (Was able to destroy the 4-eyed Golem, and injured the 5-eyed golem - which are both superior to other golems who are capable of easily destroying trees)

Speed: At least Massively Hypersonic+ (Is much faster than BoE Sami, who moved so fast that she kicked the Golem before the car travels the entire sidewalk and hit the wall)

Durability: At least Multi-City Block level (Was able to tank a kick from Sami, who was able to peform this feat)

Range: Dozen of meters with Houtengeki

Weaknesses: He cannot use his wish to defeat the Wizard or raise the dead. If he uses his wish to kill someone, his death rate increases.