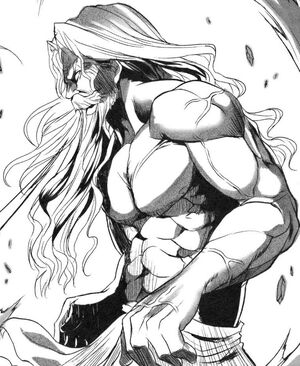 He is a secondary character of Ichiban Ushiro no Daimaou. He's the Headmaster of Constant Magic Academy who worked with Bouichirou a hundred years ago to fight against the Demon King, but has changed since then and now wants to protect Akuto Sai.

Name: Unknown, always referred to as the Headmaster

Powers and Abilities: Superhuman Physical Characteristics, Longevity (Has lived for over a century), Magic, Transformation (Can bulk up to regain the physical shape of his youth), Kakei (A fighting style based on minutely controlling the mana and turning aside his enemy's power), Can create a mana projection of himself to avoid damage, Resistance to Spatial Manipulation (Unaffected by the Hogson-style perfect slash, which cuts the dimension itself)

Speed: Supersonic (Blocked Bouchirou's sword even after it broke the sound barrier and created sonic bursts)

Lifting Strength: Class M (Stopped Genkaku from crashing into the school with his bare hands)

Stamina: He has accumulated a massive amount of mana over the course of decades to assure his longevity.

Intelligence: As the Headmaster of Constant Magic Academy, he is vastly knowable in the topics of magic.

Weaknesses: Once his mana reserve runs out, he'll become unable to gather more.