All Fiction Battles Wiki
Register
Don't have an account?
Sign In
Advertisement
in: Characters, Video-Game Characters, Final Bosses,
and 73 more 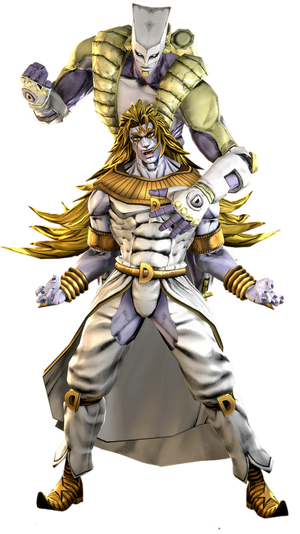 Heaven Ascension DIO is the main antagonist of JoJo's Bizarre Adventure: Eyes of Heaven, being a alternative version of DIO from a alternative world where he managed to defeat the Joestar's group during the events of Stardust Crusaders. after defeating it's enemies, he succeded in his 'Heaven' Plan evolving it's stand into The World Over Heaven and overwrite it's own world.

Superhuman Physical Characteristics, Has all the abilities of his canon counterpart, Stand Physiology, Time Travel, Enhanced Senses, Electricity Manipulation, Teleportation, Poison Manipulation (Shown Here), Regeneration (High-Mid; Comparable to it's original counterpart), Immortality (Types 1, 2 and 3), Time Stop (He's able to stop time with his Stand), Reality Overwrite (Allows Heaven DIO to turn whatever he wishes into reality), Corruption (Type 1 possibly 2), Dimensional Travel (He's able to arrive at any reality he wishes to), Morality Manipulation and Darkness Manipulation (Can use darkness to transform normal beings into his servants), Power Nullification (nulled the attacks of Tusk ACT 4 and Golden Experience Requiem's Return to Zero), Existence Erasure (Erased Valentine from existence even if he had had the full Holy Corpse), can heal himself, Resurrection, Pocket Reality Manipulation (Created his own pocket dimension), Creation, BFR, Biological Manipulation, Summoning, possible Fate Manipulation (Scaling to Jotaro as they have the same type of Stand), Spatial Manipulation, Clairvoyance, Telepathy, Resistance to Transmutation, Disease Manipulation and Mind Manipulation (Scaling to Scary Monsters), Technology Manipulation, Soul Manipulation (Can steal souls and make them his slaves as well as absorb them to further increase his power), Power Bestowal

All previous abilities, enhanced Reality Warping, Existence Erasure, and Power Nullification (His Reality Overwrite is superior to before and can overwrite things without touching them), Telekinesis (Can levitate), Weapon Creation & Homing Attack (Shown Here), Air Manipulation and Status Effect Inducement via Tornado (Can use a tornado which leaves the enemy blind for 11 seconds)

Attack Potency: Multi-City Block level (Should be superior to his canon counterpart. easily defeated Jotaro and the others during their first encounter), Multi-Solar System level via Reality Overwrite (He's capable of creating the Over Heaven Area, a dimension containing several stars) | Multi-City Block level (After a battle with Jotaro and his group, he absorbed the Holy Corpse and several souls and became immensly more powerful than before), Universe level+ with Reality Overwrite (His reality overwrite has become massively superior than before and he overwrited the entire reality of the main world; the word "World" means Universe here)

Lifting Strength: At least Class 50, Class K with The World Over Heaven

Range: Standard Melee Range physically, 10 meters with TWOH. Multiversal+ with BFR, Soul Manipulation, Teleportation, Reality Overwrite and Existence Erasure (DIO can arive at any single reality he wishes to and erased Funny Valentine from total existence, who existed through all realities which number is infinite)

Standard Equipment: The World Over Heaven

Weaknesses: DIO is not immune to paradoxical attacks, if he interacts with something the same as him from another world (for example: his bracelets) he will be in severe conditions. cannot overwrite without his arms and the Overwrite has to be physically