All Fiction Battles Wiki
Register
Don't have an account?
Sign In
Advertisement
in: Godzilla, Characters, Demons,
and 11 more 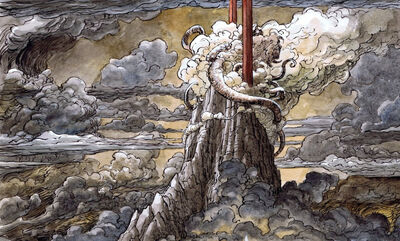 The Hell Gate Guardian is the final monster Godzilla must face through in Godzilla in Hell, being a eldritch horror creature living on the top of hell, guarding the barrier between hell and heaven.

Attack Potency: Multiverse level+ (Is a part of God which resides in the gate between the living world and hell, making him comparable to God himself who created everything within Godzilla in Hell, which includes infinite universes)

Speed: Unknown, likely Nigh-Omnipresent (Is a part of God himself, but probably doens't have full omnipresent while his complete form does)

Durability: Multiverse level+ (It needed a full power atomic breath from Godzilla to kill him)