All Fiction Battles Wiki
Register
Don't have an account?
Sign In
Advertisement
in: Characters, Web Series, Web Characters,
and 56 more 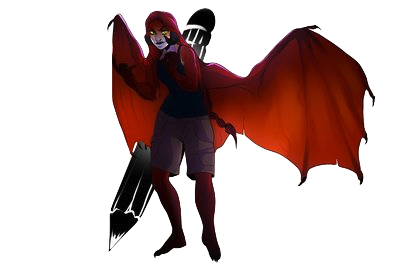 Herah is one of the unwilling gifted participants in the latest Recompense hosted by her Maker, Norwe. She is from a race called the Cendreux, and is a part of the minority of her species that still worships their goddess La Flamme. She shows her worship through her art, her great skill for the subject being a natural offshoot of her gift and seeks to one day create weapons for the planet-conquering Nettoyant that she idolizes.

Tier: At least 8-A physically, Low 7-C with Gasshbenirium Armor, High 6-C via fire, Varies from 8-A to 4-B with Jeffery, up to High 1-A with Jeffery's oE

Origin: Deluge of the Abyss

Absorption (Can absorb Jeffery's Presence and use it as fuel for her flame) and via Flame Heart and Gasshbenerium armor, Accelerated Development (Passive, as Cendreux grow older they grow stronger both physically and in their flame without any extra effort), Limited Air Manipulation (Can create blast of air through swinging her wings towards her opponents), Aura (Explosive/Elemental, Can cloak herself in her flames), Berserk Mode (Will fly into a rage whenever she feels her loyalty towards La Flamme is questioned, her goddess is insulted, or a loved one is threatened), Body Control (Advanced Control, she can force her body to use its max strength and her mind to speed up in its reaction capabilities, deaden nerves, and manipulate her own rate of regeneration), Breath Attack, Limited Conceptual Manipulation, Durability Negation, Existence and Nonexistence Erasure, Non-Physical Interaction, Limited Space-Time Manipulation via Violet Fire, Danmaku via Fire Heart, Enhanced Senses (Is able to view someone or something down to the subatomic level. Can smell distinct scents within a ten-kilometer radius, hearing and sight are sharp enough to distinguish a whirring minigun barrel from two km away), Fire Manipulation via Fire Heart, Flight via wings, Limited Heat Manipulation via Fire Heart, Homing Attack via Fire Heart, Immortality (Types 1, 2, 3, 4 & 8. In order to properly kill Herah, the flame in her chest must be snuffed out after exhausting its strength), Information Analysis via Enhanced Senses (Through combining her heightened senses, Herah can determine one's current physical condition, emotional state, and physical habits), Magic (Her fire and body are covered in magic), Limited Magma Manipulation (Her body naturally produces magma that she is able to lactate), Master Spearwoman, Natural Weaponry via claws and teeth, Portal Creation via Backpack, Regeneration (High Godly, came back from having every remnant of herself erased, including her concept. Will lower as the strength of her flame weakens), Resurrection via Fire Heart, Skilled Hand to Hand fighter, Statistics Amplification via Gassbennirum Armor (Make's her physically two times stronger and faster), Superhuman Physical Characteristics, Limited Telepathy (Can communicate mentally with Jeffery), Limited Teleportation via Violet Flame, Transmutation via Traduire and Gasshbenirium armor, Resistance to Death Manipulation (Burnt away the death that Max was inducing into her), Fire Manipulation (Is unaffected by Rose's fire and her own), Heat Manipulation (Is completely unaffected by being submerged in lava or having it within her body), Limited Mind Manipulation (Could heal her her mind after having it shattered), Pain Manipulation via Renaissance à son Sommet, and Void Manipulation (Was able to overcome the effects of the void she had been pulled into) via Presence

Passive BFR and Existence Erasure via Cendre Ring, Blood Manipulation via Arc, Self Body Puppetry and Instinctive Reaction via Mon Marionnettiste, Duplication and Self Statistics Reduction via Orb of Schízon, Explosion Manipulation and Instinctive Reactions via Chained Hands, Extrasensory Perception via Eye and Eyepatch, Healing via Cendre Skull, Light Manipulation via Light Rod, Limited Portal Creation via Bedroom Mirror, Limited Reactive Power Level and Enhanced Sight/Hearing via Goggles, Weapon Creation (Made Jeffery and Light Rod) and likely more (Herah's gift is said to be capable of making anything with no limitations on what can be made)

All previous abilities and Aura via Presence (Jeffery's Presence surrounds Herah entire form), Blessed (Jeffery's is granting her his powers), Cosmic Awareness via oE, Dimensional Travel (Through simply piercing space and time, Jeffery can hop from Universe to Universe), Dimensional Manipulation (Type 2; via oE), Existence and Nonexistence Erasure vis Jeffery's eraser (Jeffery's eraser is capable of erasing whatever it runs over, including Norwe, a non-existent being), Information Analysis via eE, Non-Physical Interaction via Presence (Can harm Norwe with her attacks), Power Bestowal (Can give Jeffery's presence to others), Power Null (Can negate the effects of Norwe's Presence), Statistics Amplification via oE (Speed, Strength, and possibly Durability), Limited Telekinesis (Can control Jeffery's body with her mind when he grants it to her) Resistance to Resistance to Aura (Overwhelming), Chaos Manipulation, Madness Manipulation (Type 2), Power Modification, Power Nullification, Spatial Manipulation, and Transmutation via OE (Is now no longer affected by the Presence of Norwe, which causes all of these effects)

Attack Potency: At least Multi-City Block level+ physically (Could match Moon, who could smash her through a wall of diamond in their first fight), Small Town level with Gasshebenirium Armor (When wearing her Gasshbenirium armor, Herah is able to succeed her previous body limits by two times), Large Island level via flame (Herah reduced a large amount of forest and more to ash), Varies from at least Multi-City Block level+ up to Solar System level with Jeffery (Jeffery destroyed a neutron star), up to High Ascendent level with Jeffery's oE (Herah Destroyed Norwe's hand with a single strike) Eraser and Violet Fire ignores durability

Speed: Massively Hypersonic (Managed to dash across a large distance to "disarm" a priest) higher with Gasshbenirium Armor (When wearing the armor, Herah is able to succeed her previous body limits by two times), Varies from Massively Hypersonic to Massively FTL+ (Able to thrust a Jeffery faster than light can cross a Planck length), Irrelevant with Jeffery's oE (Jeffery by themselves can attack at a speed beyond linear time and search the entirety of Norwe's aE)

Lifting Strength: At least Class K (Was able to lift her own body after her weight became 464800 pounds) Likely Class M (Said that she could lift over 500,000 tons, and Alex (who can tell when someone is lying or not) didn't detect any signs of lying), higher with Gasshbenirium Armor

Durability: Multi-City Block level+ (Tanked Moon smashing her through a wall of diamonds), Small Town level, possibly higher with Gasshbenirium Armor (Moon was unable to damage Herah or the armor while she was in it, though said armor was also absorbing most of the force of Moon's blows), At least Large Island level, likely higher against Heat (Was unharmed by the heat of Rose's flames, a Cendreux who should have fire greater in strength than her own), possibly High Ascendent level with Presence oE (Is using Jeffery's Presence to amplify herself. Presence has been shown to enhance durability)

Stamina: Extremely High (Has had her head caved in, arms destroyed, and her intestines torn out and was still able to get back up and fight with seemingly no issue. Even after having all her limbs cut off and destroyed, Herah stood relatively fine. Jeffery can also reinvigorate her flame, restoring her stamina to full strength. How many times this can be done is unkwown)

Intelligence: Gifted. Is an expert in the field of artistic study and able to come up with inventive and effective battle tactics with little time to actually prepare. Uses her gift and powers in effective and sometimes unconventional ways. Capable of figuring out the weaknesses and strengths of her opponent's abilities with only little observation.

Weaknesses: Is exceedingly arrogant to the point that she well take hits to prove a point and is quick to anger. Has sensitive nerves covering her entire torso, back, and bottom half of her face. Even if deactivated, sudden shocks can cause her nerves to switch back on and for any pain that should've been felt before to be felt all at once. Her smelling and hearing are susceptible to strong odors and loud noises. Use of Traduire turns parts of Herah into paint, the amount varying depending on the artistic unity of her materials, the scale of what the creation can impact, and the number of uses that can be gotten out of it. Her short temper makers her easy to goad into using her more powerful moves even when it might put her at a disadvantage. Healing and using her fire takes away from the strength of her flame. Use of Violet fire quickly depletes the strength of her flame, with only four blast possible at max strength of flame, leading to weaker and slower regen and weaker attacks so the technique is more often then not a last resort. She is unable to keep up with her own max speed normally without entering Renaissance à son Sommet. Once her armor is destroyed or she exits it, she will collapse due to overstraining of the body. Jeffery is finicky and unwilling to contribute to do more than allow Herah to control him during a fight unless she is unable to handle the situation on her own. If Herah is in control, Jeffery is only able to go as fast as Herah can perceive, though Jeffery may amp her if they see fit.