All Fiction Battles Wiki
Register
Don't have an account?
Sign In
Advertisement
in: Characters, The Elder Scrolls, Book Characters,
and 74 more 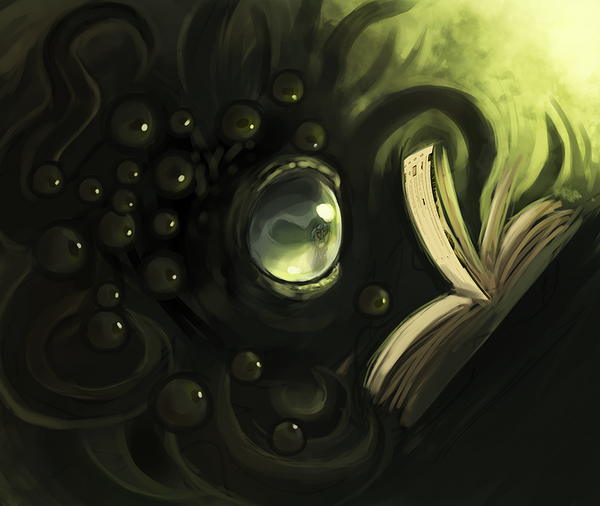 Hermaeus Mora (sometimes spelled "Hoermius", "Hormaius", or "Herma" Mora), the Demon of Knowledge, the Master of the Tides of Fate, Gardener of Men, Prince of Fate, Lord of Secrets, the Keeper of Forbidden Knowledge, the Golden Eye, Ur-Daedra, the Abyssal Cephaliarch, Old Antecedent, Scryer, Inevitable Knower, also known to the ancient Atmorans and Bosmer as Herma-Mora, the Woodland Man, to the Ayleids as Hyrma Mora, and to the Khajiit as Hermorah, is a Daedric Prince whose sphere is forbidden knowledge and the "scrying of the tides of Fate, of the past and future as read in the stars and heavens, and in whose dominion are the treasures of knowledge and memory". Mora has been called the wisest of the Daedric Princes, with a mind as old as Tamriel and a body of slime, though he describes himself as "[t]he riddle unsolveable. The door unopenable. The book unreadable. The question unanswerable." Unlike most Princes, Hermaeus Mora does not take on a humanoid form, manifesting instead as varied, grotesque assemblages of eyes, tentacles, and claws, or a featureless purple vortex known as the Wretched Abyss.

Apocrypha is Hermaeus Mora's plane of Oblivion, an endless library where all forbidden knowledge can be found. Each book sports a black cover without a title, and the realm is reported to be haunted by ghosts forever searching for knowledge. His servants include Daedra such as Seekers and Lurkers, but he is known to have mortal worshipers too. Sailors have referred to "Herm'us Mora" as a being that lurks in the oceans. Similarly, the Khajiiti Hermorah controls the tides and lives in a vast library under the sea.

Hermaeus Mora is tangentially related to the origins of the Morag Tong by association with his sibling, Mephala. Mora's enemies are said to be Ebonarm and Vaermina, and his summoning day is the 5th of First Seed

Name: Hermaeus Mora, Demon of Knowledge, Master of the tides of fate, Gardener of Men,Prince of fate, Lord of Secrets, Keeper of forbiden Knowledge, The Golden Eye, Ur-daedra

Attack Potency: High Hyperverse level (Hermaeus Mora is a Daedric Prince which maintains and comprises Oblivion, and is one of the Ruling Princes and holds a great piece of oblivion in which he holds absolute control of, he was also one of the original Et'Ada who created oblivion) | Ascendent level (In His Original State Before creating Oblivion, he was an Et'Ada who were Boundless, Eternal and Infinite Spirits who existed wholly independently of duality, predating the concepts of Time and Space, and living in pure harmony, having practically no personalities or boundaries that separated themselves from anything else, inhabiting creation in its original Zero-State of pure Infinite possibility, where everything that can and cannot happen is always happening all at once, forever, regardless of contradictions)

Speed: Immeasurable (Can travel the infinite realm of Oblivion) | Omnipresent (Inside his domains) | Irrelevant

Intelligence: Nigh-Omniscient (Is considered the wisest and smartest amongst all of the Daedric Princes)