All Fiction Battles Wiki
Register
Don't have an account?
Sign In
Advertisement
in: Characters, Genderless Characters, Immortals,
and 77 more 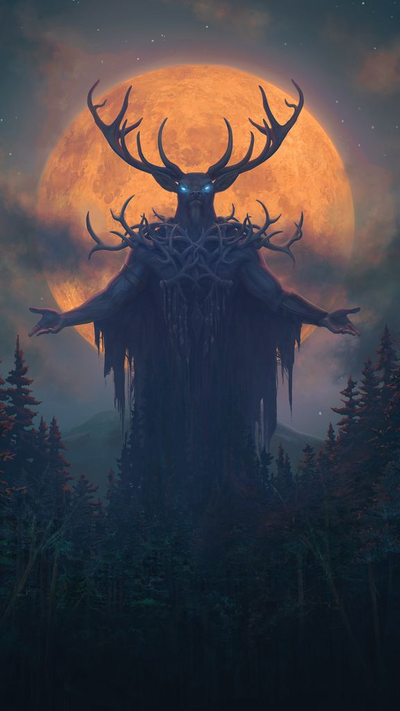 Hircine, known as the Huntsman, the Father of Manbeasts, Lord of the Hunt, Master of the Great Hunt, Master of Beasts, Master of the Chase, and Half the Conscience of Man, is a Daedric Prince whose sphere is the Hunt, the Sport of Daedra, the Greatest Game, and the Chase and Sacrifice of Mortals. His realm of Oblivion is the Hunting Grounds, an endless forest where the Prince and his Huntsmen hunt great beasts, people, and even other Daedra. Hircine is a sportsman who thrills in the hunt, regardless of the prey, though his worshippers enjoy giving their prey a chance for victory, however small. He is typically portrayed with a great spear and either the head or skull of an elk, said to belong to Y'ffer's champion, the Graht-Elk

As Hircine is the Father of werebeasts, lycanthropes are often referred to as his "children". The Huntsman is a guardian to those he has "blessed" with the ability to change forms. (though most may see these creatures as "cursed" abominations). Indeed, one of the Prince's artifacts, the Ring of Hircine, is said to help lycanthropes control their powers. However, Hircine is quite prideful of lycanthropy. He resents those who received his gift willingly but have come to regret it, and thus may task people with slaying his unappreciative children to put them out of their misery. Regardless of whether they worshipped him or not, Hircine will typically claim the souls of werewolves, and they will spend eternity in the Hunting Grounds

Gender: Inapplicable, More commonly takes the form of a Man

Attack Potency: Low Macroverse level (Fought againts The Nerevarine who defeated Dagoth Ur and is comparable to the Weakened Tribunal, should be vastly above Barbas who is comparable to The Dovahkiin and could fight The Vestige) | High Hyperverse level (Hircine is a Daedric Prince which maintains and comprises Oblivion, and is one of the Ruling Princes and holds a great piece of oblivion in which he holds absolute control of and is one of the Original Et'Ada who help with the creation of Oblivion) | Ascendent level (In His Original State Before creating Oblivion, he was an Et'Ada who were Boundless, Eternal and Infinite Spirits who existed wholly independently of duality, predating the concepts of Time and Space, and living in pure harmony, having practically no personalities or boundaries that separated themselves from anything else, inhabiting creation in its original Zero-State of pure Infinite possibility, where everything that can and cannot happen is always happening all at once, forever, regardless of contradictions)

Speed: Immeasurable (Can keep up with The Nerevarine, should be comparable to gods Like Vivec and Dagoth Ur, can travel the infinite realm of Oblivion) | Omnipresent (Inside his domains) | Irrelevant

Weaknesses: He is Honorable to a fault and does not play dirty tricks nor does he like unfair fights, and does not like to kill helpless prey