All Fiction Battles Wiki
Register
Don't have an account?
Sign In
Advertisement
in: Characters, Female Characters, Geniuses,
and 40 more 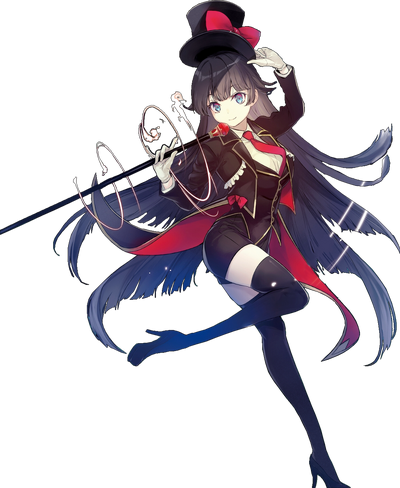 Hydemary Alzbayne is the assistant as well as disciple of Yakagi Suimei, and a homunculus known to be as the magnum opus of "The Doll Master" Edgar Alzbayne and a bona fide genius.

She was entrusted to Suimei with the goal of allowing her to develop to become a successful independent magician due to the predicament created by her very nature as a homunculus. After the sudden disappearance of Suimei she searched the entire globe three times in search for him, resulting unsuccessful every time. Until six months later he reappeared in his backyard having returned from a different world entirely with new companions and apprentices.

Superhuman Physical Characteristics, Genius Intelligence (She is the magnum opus of homunculus and is considered a genius even among genius as even regular homunculus stand atop the hierarchy of intelligent beings), Enhanced Senses, Extrasensory Perception (Can sense mana, the deployment of spells and the general phenomena being manifested), Magic, Intangible Attacks (Mystical substances are different from physical substances and as such cannot be defended against using only conventional physical means), Non-Physical Interaction (Can interact with the mystical.), Conceptual Manipulation (Type 1; Magicka uses a conceptual approach to manifesting phenomena rather than a physical one. The Elements that mages use in the other world, are just 1 example of a mystical law. Apparitions are things that magicians can defeat, they are conceptual existences, which are a law of the world which accelerates the end of the world), Technology Manipulation, Law Manipulation (Can give birth to her own mystical laws to use magicka; Her body which is steeped in mysteries has an adverse effect on physical-laws which causes things that rely on them to malfunction), Statistics Amplification (Can amplify her strength with her mana furnace), Subjective Reality (Her magic uses anything that can be considered a toy to bring forth her fantasies), Information Analysis (Capable of accessing the objective knowledge of the Akashic Records, the records of the past, present and future of all parallel worlds. Can read the nature of attacks and expose their weaknesses), Body Puppetry (Can create dolls that control others against their will), Telekinesis, Flight (Learning to fly after gaining the ability to use magicka is the first thing everyone does), Self-Sustenance (Type 1; As a magician, Hydemary altered the blueprint for her body in order to gain an organ capable of allowing her to cool down and lose the need to breathe or exhale and thus can continuously keep chanting), Limited Illusion Creation (Glamour magicka changes how others perceive her appearance), Skilled Swordswoman, Forcefield Creation (create barriers), Air Manipulation, Transmutation (Can erect a whirlwind around herself that turns incoming attacks into confetti), Martial Arts (Combat techniques are essential for magicians), Electricity Manipulation (Can create an electrical current electrify and hurl objects around), Weapon Creation (Can create a sword out of her picture book), Limited Reality Warping (For a magician with sufficient power, without any sort of chant or action, they could manipulate phenomena to an extent with only an image in their mind), Summoning (Can bring forth a battalion 32 of human-sized card soldiers, a giant rabbit, or a giant teddy bear), Spatial Manipulation (Her card soldiers can hold back spatial attacks such as the compression of space itself), Curse Manipulation (Her teddy bear has a cruse which paralyzes that which it comes into contact with), Creation, Density Manipulation (Can condense her mana into weight and then mass), Aura (Can exert mana pressure on the opponent), Fear Manipulation (Can induce pressure on the psyche), Paralysis Inducement (Her aura can paralyze her opponents or physically bind them in place), Power Nullification (Vanity Cutters uses the idea of truth to slice through nonsense and vanishes it; By extending her aura she can obstruct the activation of magic; Capable of dispelling; By triggering rank disparity extinction, a universal law that shuts down mystic phenomena of others)

Stamina: High | Limitless (A magician's magicka furnace allows them to generate mana endlessly, generating the same amount of mana that they use upon their spells)

Standard Equipment: Magician uniform, a wand and a toy box.

Intelligence: Extraordinary Genius (She who is the magnum opus of homunculus is considered a bona fide genius even among genius as even regular homunculus stand atop the hierarchy of intelligent beings; Capable of drawing upon the knowledge of the Akashic Records, the records of the past, present and future of all parallel worlds and timelines. Hydemary is the creator of her own magicka system)

Weaknesses: The Akashic Records only present her with objective knowledge of things, including things like emotions rather than experiencing it herself.