All Fiction Battles Wiki
Register
Don't have an account?
Sign In
Advertisement
in: Characters, Bleach, Protagonists,
and 45 more

Ichigo Kurosaki (黒崎 一護 Kurosaki Ichigo) is the son of Masaki and Isshin Kurosaki, a Quincy with the powers of a Shinigami. Years after the death of his mother, Ichigo uses his innate spiritual awareness to help local ghosts, and unlocks his potential as a Shinigami when Rukia Kuchiki comes along in pursuit of a Hollow.

Superhuman Physical Characteristics, Master Swordsman, Hand-to-Hand Combatant, Accelerated Development, Reactive Power Level (As noted by Grimmjow. Ichigo is able to evolved remarkably within a very short period of time and continued to grow even during battle), Pseudo-flight, Spiritual Awareness (Can see invisible spirits and objects), Extrasensory Perception (Can sense beings with Reiatsu), Longevity, Can take his reiryoku and exert it as reiatsu, Statistics Amplification (Can use Shunpo to boost his speed), Afterimage Creation, Dimensional Travel (With Senkaimon), Transformation (Can transform into a hollow), Energy Projection, Multiple Personalities (Ichigo and his Zangetsus are separate spiritual entities that cannot be separated and have distinct personalities from each other), BFR (Shinigami can transfer the souls of the dead to either Soul Society or Hell depending on the deeds they've committed when they were alive with their Zanpakuto), Soul Manipulation (Shinigami can directly damage souls with their Zanpakutō), Invisibility, Non-Physical Interaction (Can harm and interact with intangible spirits and objects), Overwhelming Aura (Spiritual pressure can passively induce ailments ranging from paralysis to disintegration), Resistance to Possession, Power Absorption, Soul Manipulation, Extrasensory Perception (As a transcendent being he cannot be sensed by inferior opponents unless he allows it), Memory Manipulation (After Senna wiped everyone's memories Ichigo was the only one to retain his memories of her and even certain events such as him visiting The Valley of Screams before), Paralysis Inducement (Was unaffected by Candice's 5 Gigajoule arrow), Sealing (Broke out of a series of high level seals meant to seal off his movement capability), Power Mimicry (Tokinada can only copy Zangetsu appearance but not its power), and High Temperatures (Able to bathe in Kirinjo's hot spring, and without protection the water can cause the spiritual being's bodies to erode and rupture from exposure to the waters), Space-Time Manipulation and Gravity Manipulation (Capable of withstanding the effects of Sosuke Aizen’s Kurohitsugi with full incantation which is stated to be able to warp space and time)

All abilities in his first form, in addition to the above, Immortality (Type 3 and 4), Possibly Self-Sustenance (Type 1), Regeneration (Low-Mid; regenerated a hole in his chest) and Resurrection (Zangetsu's possession can resurrect Ichigo, healing his wounds), Berserk Mode, Body Control (Can grow extra appendages like arms or even spawn creatures from his body), Limited Telekinesis (With his ability "Chain" he can summon Zangetsu back to his hand if it's elsewhere), Instinctive Reaction (Zangetsu can save Ichigo from fatal wounds by deploying his mask at the targeted area)

All abilities in his first form minus Transformation, in addition to Limited Blood Manipulation (Using Blut, Ichigo can flood his blood vessels with energy to reinforce them), Energy Absorption, Resistance to Absolute Zero via Blut Vene (Due to being more powerful than As Nodt he should be able to replicate the same level of resistance he showed to Rukia Kuchiki's Shikai)

Stamina: Extremely high. Ichigo is a stubborn man who won't give up on fighting even when seriously injured and near-death, at one point fighting against Zangetsu within the Dangai for 3 months

Range: Extended melee range, further with the shockwaves of his attacks, Hundreds of Meters to Kilometers with Getsuga Tenshō

Standard Equipment: His Zanpakutō, Zangetsu, and his Substitute Shinigami Badge

Intelligence: Though he may be brash and headstrong, Ichigo is deceptively intelligent, remaining among the top students in his class even when juggling his studies with his work as a Substitute Shinigami. He takes to combat well, even if he isn't the calmest person or one for long-term planning, fighting skillfully against opponents with much more experience

Weaknesses: Ichigo is brash and can rush into fights without thinking, and he can also be too merciful or have his powers limited by his lack of fighting spirit.

Shunpo: An application of Hohō used by Shinigami, allowing for high-speed movement, much faster than the eye can follow, used in combat and travel, typically in short bursts. The skill can be summarized as taking the least amount of steps to reach point B from point A. While he makes skillful use of Shunpo, Ichigo is not particularly well-versed in the specifics of the technique and his use of it is fairly straightforward.

Fullbring: Ichigo's Fullbring is dependent on his Substitute Shinigami Badge, which, when first activated, emits energy from its four sides in the shape of Tensa Zangetsu's tsuba. He uses it for primarily defensive purposes, but after he advances his control over it further, it covers him in black reiatsu and gives him a simple, black blade. Once completed, Ichigo's Fullbring covers him in white, bone-like armor and a black bodysuit, and in this form, he can create tsuba-shaped bursts of energy that he can use similar to a Getsuga Tenshō. 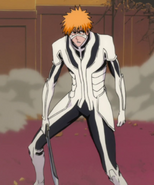 Shikai: Ichigo's True Shikai takes the form of not one, but two blades, one in the shape of his original Shikai and a hollow portion, while the other is smaller, more akin to a knife. The larger blade represents his inner Hollow, and the smaller blade his Quincy powers. When Ichigo merges with his inner hollow, the larger blade turns white.

Bankai - Tensa Zangetsu: To activate his True Bankai, Ichigo brings both the blades of his Zanpakutō together, fusing them into a massive blade similar to that of his original Shikai, with the smaller blade occupying the hollow inside of the larger. Yhwach regarded Ichigo's bankai as too powerful and destroyed it instantly before we could see its godly power. After Yhwach absorbs Ichigo's powers, the exterior of the blade shatters to reveal the True Zangetsu.

Merged Hollow Form: After discovering the true nature of his Zanpakutō, Ichigo can enter into a more powerful state by merging with his inner Hollow. In this form, the left side of Ichigo's face and neck change to resemble the form his inner Hollow took on while fighting Ulquiorra Cifer, as well as his former Hollowfication; his left eye inverts in color with a black sclera and yellow pupil, he has dark marks running down his face and along his neck, and he gains a long, forward-pointing horn on the left side of his head. While in this form, the larger blade of Zangetsu turns white. 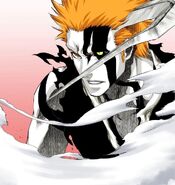 Blut: An advanced Quincy technique that works by pumping Reishi into the user's blood vessels, reinforcing either their strength or durability to exceptional levels. There exists a defensive and offensive form of Blut, but only one can be used at a time; Ichigo seems to make subconscious use of these. 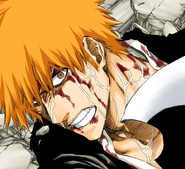