All Fiction Battles Wiki
Register
Don't have an account?
Sign In
Advertisement
in: Characters, Male Characters, Superheroes,
and 31 more

Izuku Midoriya (緑みどり谷や出いず久く Midoriya Izuku), also known as Deku (デク Deku), is the main and primary protagonist of the My Hero Academia manga and anime series.

Even though Izuku was born Quirkless, he manages to catch the attention of the legendary hero All Might due to his innate heroism and a strong sense of justice, and has since become his close pupil, as well as a student in Class 1-A at U.A. High School. All Might passed on his transferable Quirk to Izuku, making him the ninth holder of One For All. Now on his path to becoming the greatest hero, Deku battles nefarious villains, endless schoolwork, and his inner demons to become a worthy successor to the Symbol of Peace.

Following the Paranormal Liberation War, with Tomura Shigaraki and All For One actively targeting Izuku for his Quirk, he decided to leave U.A. before finishing his first year to keep his classmates out of harm's way. He is still continuing to fight villains.

However, after being found by his classmates, with the help of Nezu and Endeavor, while he was trying to runaway from them, they eventually managed to convince him to return to the U.A. and allow them to accompany him in his fight against All For One and Tomura.

Once back to the U.A., which was now fortified with a security system comparable to that of Tartarus, when he and his classmates were about to enter the school, all the civilians, who were brought there for their own safety, protested against it and didn't want Izuku to enter the U.A. (As All For One spread the rumor that Izuku had been targeted by him and owned One For All).

This protest continued until Uraraka gave a speech for him and all the remaining heroes, which made all civilians understand that now the heroes are the ones who need help and must give it.

Following the fight between Star and Stripe and AFO Tomura Shigaraki, Izuku, along with his classmates, receives information about this from Toshinori Yagi, who also informs them that because of this fight, AFO Tomura Shigaraki's body will now need even more time to be completed.

Several days have passed, after receiving that information, and both he and his classmates finally found out through Toru Hagakure, who was spying on Aoyama and his parents, who were speaking outside the U.A., that Ayoama was actually one of All For One's spies.

After being restrained by police, Aoyama's parents finally told the truth that they were indeed working for All For One and that they were doing so only because they knew that if they were to betray him, would have been killed by him.

As events progressed, Izuku tried to persuade Aoyama to return to their side to bring him down, telling him that they could still be heroes together.

However, Aoyama did not accept the offer at first, as he was still terrified of All For One, and eventually both he and his parents were taken to prison.

After that, as Izuku and his classmates were preparing for the final battle, they all, with anger and rage in their eyes, vowed to take down All For One.

Aoyama, after talking to Aizawa in prison, decided to accept his classmates' proposal and help them bring down All For One.

Once Aoyama accepted their help, they managed to pull him into a trap, in which Izuku and Aoyama confront him alone, only to give him the false sentiment of having the upper hand in the battle.

Now that the final battle has finally begun, Izuku and his classmates are now doing their best to bring down the villains and end All For One's era.

Superhuman Physical Characteristics, Statistics Amplification (One for All immensely boosts his strength, durability and speed), Shockwave Creation (The sheer force of his attacks are capable of creating shockwaves), Acrobatics (Shown here), Pain Tolerance (Type 2), Power Bestowal (The wielder of One For All can pass down his power to other people of their choice), Limited Reactive Evolution & Accelerated Development (Quirk users have been shown to evolve or increase the strength of their quirk when in a life or death situation), Resistance to Power Absorption (One For All is incapable of being forcibly stolen unless the wielder is willing to give it. Shigaraki was unable to forcibly steal it with All For One) and Mind Manipulation (Managed to break out of Shinso's mind control)

All previous abilities, plus Analytical Prediction, Pseudo-Flight (Can propel himself into the air with Air Force attacks), Air Manipulation (Can create and throw blasts of wind at the enemy), Energy Manipulation (With Blackwhip he can create black tendrils of energy which he can use to attack pull things toward him, or draw himself toward something else. Can restrain targets and throw them away)

All previous abilities, plus Martial Arts, Flight (Float allows him to float in the air, essentially allowing him to fly), Enhanced Senses & Extrasensory Perception (Danger Sense alerts Deku of potential incoming threats, allowing him to react to it like a sixth sense. Sensed that Muscular was coming out of a smokescreen and read his moves better. Can predict incoming attacks even from blind spots. Can sense hostility and bloodlust), Smoke Manipulation (Can expel smoke from his body, which he uses to hide from foes and cover his tracks), Kinetic Energy Manipulation (With Fa Jin he can build up motion-based energy for temporary storage and release, which he can charge up to 100% and use it without suffering drawbacks)

Attack Potency: Wall level+ (Sliced a victory bot in half, which are this strong), Large Building level+ with 5% and 8% (Shattered Wolfram's steel beams with a kick. Capable of fighting against Bakugou and briefly overpowered him, whose explosions could cause this much damage), Mountain level+ with 100% (Overpowered and destroyed a massive metal cube thrown by Wolfram) | At least Wall level+ (Stronger than before), Large Building level+ with 5% and 8%, Multi-City Block level with 20% (His St. Louis Smash could create a shockwave this strong), Large Island level with 100% (Stronger than before. Dispersed a storm with this much power) | At least Wall level+ (Much stronger than before). At least Multi-City Block level with 30% (Capable of using Full Cowling at 30%, which should be naturally stronger than his 20%), Large Island level with 45% (Physically stronger than AFO Shigaraki, who is as strong and sturdy as both All Might and USJ Nomu). At least Large Island level with 100% (Much stronger than his 45%; Capable of completely overwhelming and damaging Shigaraki beyond even his capability to heal), higher with Fa Jin (Can build up motion-based energy for temporary storage and release, which he can add up to 100% without breaking his bones)

Stamina: Very high (Capable of fighting while enduring the pain of his bones being shattered. He was capable of thinking coherently with a broken arm and two broken legs while falling at terminal velocity after striking down an Executor Bot and able to endure the agonizing pain of using his maximum output of One For All many times while receiving a beating from Muscular. Even after being stabbed in the arm and legs he managed to keep fighting. Capable of enduring the pain of re-breaking his fingers with 100% strikes, and clenching a fist with a completely broken hand)

Intelligence: Gifted (Deku is excelled at making split-second decisions and analyzing/predicting his enemies' moves. Capable of quickly locating the weaknesses of the opponent he is facing. Could figure out how to use his quirk in a more effective manner within minutes of thinking; Managed to set up a strategy on the fly against Lady Nagant by combining multiples quirks in quick succession under the right time. Could determine Stain's location in a large city based on the latter's previous murders. Capable of reading his opponents' moves and countering accordingly. Tracked Stain's movements and exploited his blind spot. Capable of quickly discerning when someone is impersonating his friends. Managed to create a plan to rescue Bakugou from All For One without breaking any laws)

Weaknesses: Using One For All at 100% will break his limbs | Same as before; Creating too many tendrils with Blackwhip decreases his control over the Quirk. It can go out of control if Deku doesn't keep his emotions in check. | Same as before, but now can use 100% without breaking his bones with Fa Jin. Using all the Quirks in quick succession slows down his parallel processes.

One For All: Transferred to him from Toshinori Yagi, Izuku's Quirk allows him to stockpile an enormous amount of raw power, allowing him to significantly enhance all of his physical abilities to a superhuman level. This results in unbelievable levels of strength, speed, stamina, agility, and durability. 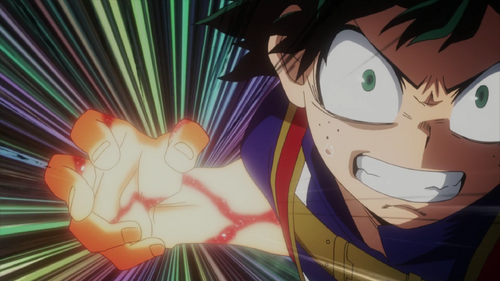 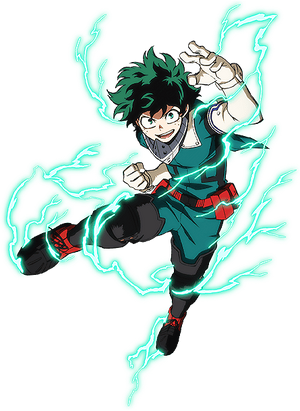 Through his training with Gran Torino, Izuku was able to unlock this stage of his power and get better control of his Quirk. This technique allows Izuku to utilize a percentage of the full power of One For All throughout his body, by letting the power course and flow through him instead of concentrating it in one location. 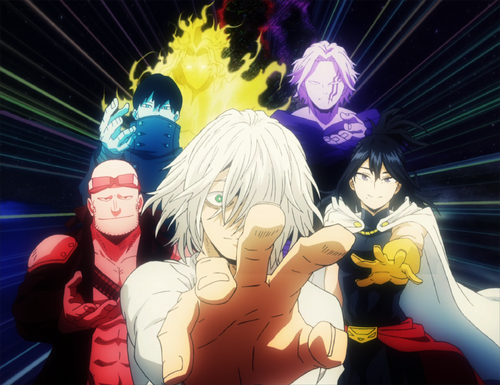 The stockpiling power of One For All has reached a point where the eight previous bearers of One For All, despite being long dead or no longer having the Quirk, can interact not only with the current bearer but with each other as well. This allows Deku to speak freely with his predecessors, gaining their knowledge even amid battle. The vestiges also provide him with resistance to mind-altering effects, as their combined wills work alongside his own.