All Fiction Battles Wiki
Register
Don't have an account?
Sign In
Advertisement
in: The Dragon Prince, Characters, Female Characters,
and 15 more 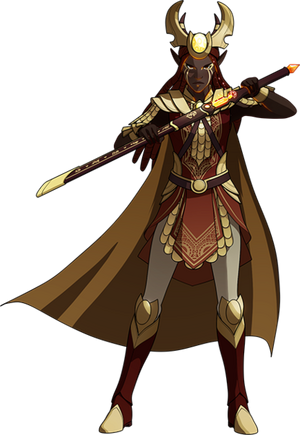 Janai is a Sunfire Elf, the younger sister of the late Khessa and her successor, but she prefers to be known by her military title: The Golden Knight of Lux Aurea. Janai and her squadron have taken up patrol of the Border, where they discovered an unexpected incursion of troops from Katolis.

Attack Potency: Wall level (Able to fight on par with and overpower General Amaya, superior to Rayla), higher (Heat-Being Mode increases her physical abilities), higher with Sunforge Sword (Her Sunforge Sword is constantly at a temperature of 1,800°F or 982°C)

Speed: Superhuman (Superior to Callum and Rayla), with Subsonic attack and reaction speed (Should be on par with or above Rayla)

Intelligence: Above Average (Able to set a trap that almost caught General Amaya who is a seasoned General in the Standing Battalion)