All Fiction Battles Wiki
Register
Don't have an account?
Sign In
Advertisement
in: Characters, Female Characters, Humans,
and 22 more 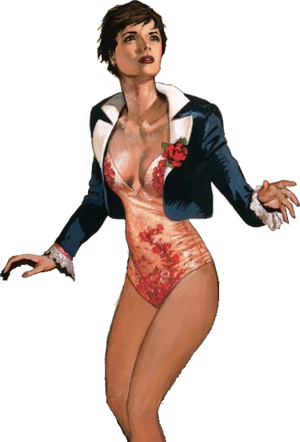 Jill Presto is an aspiring cabaret star, who became the recipient of the Basanos, and thanks to their probability magic, she became the star that she wanted.

Born in Pittsburgh, Jill moved to Hamburg, hoping to break through as a cabaret singer. The only job she got at the low quality bar was as a magician's assistant. At that time, the Basanos escaped their imprisonment and was searching for a host, and found it in her.

Classification: Human, Host of the Basanos

Powers and Abilities: Superhuman Physical Characteristics, Blessed, Immortality (Types 1, 3, 4 and 8. Blessed and granted immortality by The Basanos), Regeneration (Mid-Godly, possibly High-Godly. Will instantly regenerate from any wound due to her connection with The Basanos. Lucifer's flames cant destroy her. Survived a storm that was raging and tearing apart all the realms in Creation), Teleportation, Reality Warping, Fire Manipulation (Can produce fire out of nowhere), Memory Manipulation, Telepathy, Precognition (Type 2. Can simultaneously see the past, present and future of every being; The past like a wire and future as million filaments, seeing the world as through a hundred stained glass windom, with nothing escaping her sight), Fate Manipulation and Probability Manipulation (Can choose a future that best fit her purposes. Can alter destiny and probability itself to make her targets inevitably lose), Death Manipulation (Can see all possible deaths from the past/present/future and make them happen instantaneously), Healing and Resurrection (Can alter the present to heal or resurrect others), Supernatural Luck (Due to the connection with Basanos, she will always have success in her life without the need to do anything), Non-Physical Interaction, Immortality Negation (Types 1, 3 and 5) and Acausality Negation (Type 5), Resistance to Mind Manipulation and Power Nullification

Attack Potency: Wall level (Fought against Cestis, who can destroy a brick wall). Can ignore durability and channel the power of The Basanos

Range: Several meters, up to Ascendental with the power of The Basanos