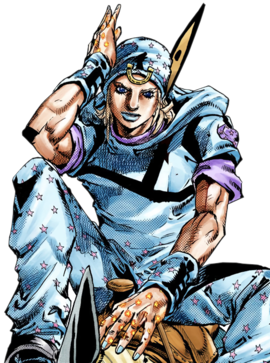 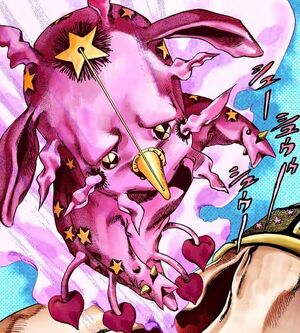 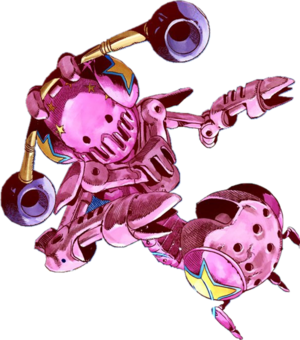 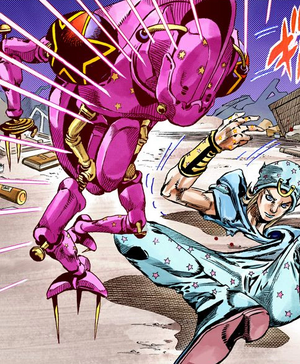 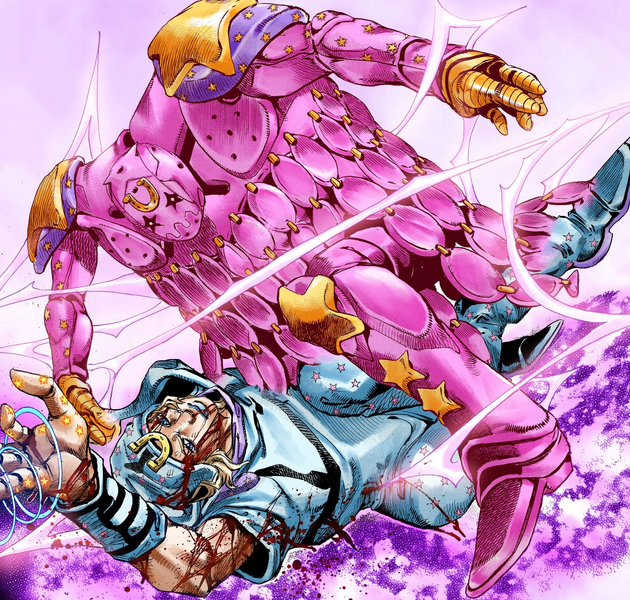 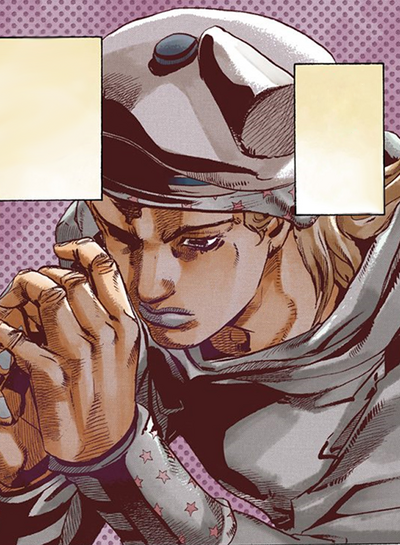 Johnny Joestar is the seventh "JoJo" in JoJo's Bizarre Adventure and one of the two main protagonists of Part VII: Steel Ball Run. A prodigy jockey in his youth, his life spirals downward when he is shot in the back and left a paraplegic. Years later in 1890, right before the cross-country Steel Ball Run race, he is lured by the mystical abilities of Gyro Zeppeli and his steel balls when touching one of them causes his legs to move. After numerous attempts, Gyro gives in and indulges Johnny in the Spin as long as he helped him win the race.

Johnny eventually becomes involved in the search of the nine parts of the Holy Corpse after attracting a left arm into his body. He believes that with the Holy Corpse, he can get himself back to "zero", but is conflicted by Funny Valentine and his patriotic ideals.

Superhuman Physical Characteristics, Extrasensory Perception (Capable of seeing ghosts and souls among some other supernatural forces that are normally otherwise invisible), Skilled marksman, Can fire regenerative nail bullets, Aura, Limited Acrobatics, Multiple Personalities (Type 2; Tusk is a spiritual entity and Guardian of the Left Arm, granted to Johnny by the Saint's Corpse), Summoning (Of his Stand), Healing with Zombie Horse, Resistance to Transmutation, Disease Manipulation, and Mind Manipulation with Corpse Parts (The Holy Corpse allows the holders to resist Scary Monsters and similar abilities)

Stand Physiology, Extrasensory Perception (Capable of seeing ghosts and souls among some other supernatural forces that are normally otherwise invisible), Invisibility (Only other Stand Users can see Stands), Incorporeality (Stands are the incorporeal manifestations of one's vital energy, and can only be harmed by other Stands), Non-Physical Interaction (Stands can interact with ghosts and other Stands), Selective Intangibility, Flight (Within its effective range), Aura, Power Bestowal (Allows Johnny to fire nails like bullets and grant him access to the spin)

Same as before, Enhanced and homing nail bullets powered by the Golden Rotation that upon impact leaves a hole that will chase an intended target for several seconds, the holes can move damage from objects and targets to something else and the holes themselves negate durability

Same as before, Spatial Manipulation and Creation of holes or "portals" by shooting himself to reach a boundary between dimensions, while utilizing these portals Johnny can reach Small Size (Type 9) as well as control his body parts freely, Limited Dimensional Travel (Can allow Johnny to hide between the boundaries of dimensions, the holes themselves could enter Love Train), also acts as a temporary case of Dimensional Storage with ACT3. The holes resist BFR

Same as the previous ACT's with the addition of Superhuman Physical Characteristics, Afterimage Creation (Its attacks often leave numerous afterimages), Dimensional Bypassing/Spatial Manipulation, Dimensional Travel (Can hide within the holes, the Infinite Rotation's damage followed Funny Valentine through numerous alternate dimensions), Enhanced Homing Attack, Biological Manipulation, Deconstruction & Matter Manipulation (Deconstructed and altered many of Valentine's bodies, deconstructed a chariot, "each cell of" Valentine's bodies were being affected), indefinite/infinite attacking with with ACT4 and the Infinite Rotation, Gravity Manipulation (With the Infinite Rotation), Soul Elimination, Resistance Negation (Using the Infinite Rotation's power of gravity, Johnny can force the target and their soul to obey the laws of physics), BFR (Eventually sends those effected to another dimension), Power Bestowal & Life Manipulation (Created Les Feuilles) and minor Body Control & Elasticity (Can move its head in all directions as if on a pivot and flatten and spread its body as if it was a 2D image on surfaces). ACT4 itself has Resistance to Time Stop (Could move and speak in Alternate Diego's Time Stop), BFR & Probability Manipulation (Bypassed Love Train's redirection of misfortune onto other areas of the world)

Stamina: High (Survived through several shootouts, managed to live even after having been shot in the head).

Standard Equipment: Slow Dancer (His horse), Tusk (His Stand), Zombie Horse (A long piece of thread that heals wounds and can reattach mutilated body parts as well as mending some internal damage), pieces of the holy corpse (Has the full corpse in Part 8), some herbs and plants used to accelerate his nail's regenerative process and one Steel Ball