All Fiction Battles Wiki
Register
Don't have an account?
Sign In
Advertisement
in: Characters, The Elder Scrolls, Genderless Characters,
and 75 more 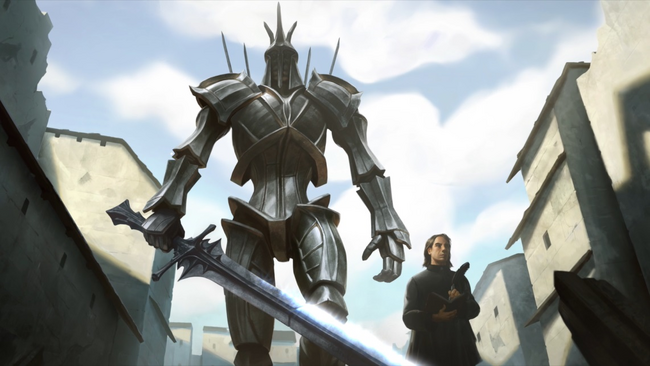 Jyggalag, the Prince of Order, is a Daedric Prince whose sphere represents logical order and deduction; his great library once contained a logical prediction of every detail of the world and of every action that would ever take place on Mundus or Oblivion, long before they actually happened. Until the Third Era, the Prince was virtually unknown in Tamriel beyond his name, having been cursed in antiquity to become the Prince of Madness, Sheogorath. After the events of the last Greymarch, Sheogorath and Jyggalag are no longer the same Daedric Prince, however they are still connected in other ways

It is said that the Daedra fear wisdom and order, and for his similarities to Jyggalag's principles, they feared Sotha Sil above all others. Apostles of Sotha Sil noted that of all the Daedra, only the "Gray Prince of Order" knew his nature, and went mad in the knowing

Jyggalag commands his own Daedra, the Knights of Order, which are spawned from obelisks summoned by his followers, the Priests of Order. He is viewed as stern, bleak, and colorless, with him and his soldiers lacking originality

Attack Potency: High Hyperverse level (Jyggalag is a Daedric Prince which maintains and comprises Oblivion, and is one of the Ruling Princes and holds a great piece of oblivion in which he holds absolute control of, he was also one of the original Et'Ada who created oblivion) | Ascendent level (In His Original State Before creating Oblivion, he was an Et'Ada who were Boundless, Eternal and Infinite Spirits who existed wholly independently of duality, predating the concepts of Time and Space, and living in pure harmony, having practically no personalities or boundaries that separated themselves from anything else, inhabiting creation in its original Zero-State of pure Infinite possibility, where everything that can and cannot happen is always happening all at once, forever, regardless of contradictions)

Standard Equipment: The Sword of Jyggalag

Intelligence: Nigh-Omniscient (Was possibly considered the wisest and smartest amongst all of the Daedric Princes before being cursed to become Sheogorath)