All Fiction Battles Wiki
Register
Don't have an account?
Sign In
Advertisement
in: Kaiju No. 8, Characters, Male Characters,
and 23 more 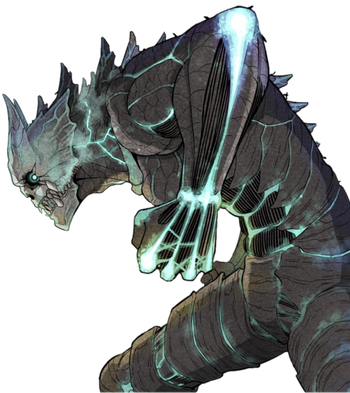 Kafka Hibino is a Defense Force member and a form worker for the Professional Kaiju Cleaning Company Monster Sweeper Inc.. After a kaiju managed to enter his body, he obtained the ability to turn himself into a humanoid kaiju.

Powers and Abilities: Superhuman Physical Characteristics, Regeneration (Low-Mid; he can regrow lost limbs almost instantly), Transformation (He can turn into a human or kaiju), Shapeshifting (He can completely change his shape), Precognition (He can sense kaiju before they appear), Extrasensory Perception (He can sense the exact location where a kaiju is coming from), Enhanced Senses (He has enhanced hearing and sight), Sound Manipulation (He can create sonic blasts from his mouth), Regeneration Negation (Up to Mid; he was able to slow down the regeneration of Kaiju No. 9 who can regenerate from decapitation), Body Control (He can create more limbs), Elasticity (He can stretch his limbs), Statistics Amplification (He can power up certain attacks with unknown means), Biological Manipulation (He could create an entirely new mouth on his torso) Martial Arts (Type. 2, he's able to take on formally trained defense force members).

Attack Potency: Building level (He could hit a kaiju with this much force)

Speed: Subsonic (He can move faster than the eye can see)

Lifting Strength: Class 5 (He could lift his work van)

Durability: Building level (He can take attacks from Kaiju No. 9 would can survive his attacks)

Stamina: High (He could fight Kaiju No. 9 and Soshiro)

Intelligence: Above Average (Kafka's time as a member of the kaiju disposal team gives him immense knowledge on kaiju anatomy, using it to identify weaknesses and the type of monsters he's facing)