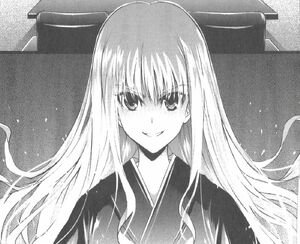 Kazuko is an antagonist of Ichiban Ushiro no Daimaou. She's the Empress of Japan who took over the magical powers of her twin sister 2V to be able to control Zero and thus control the world.

Age: Unknown, but it is said to have lived way longer than any ordinary human

Powers and Abilities: Superhuman Physical Characteristics, Technological Manipulation (Yata no Kagami allows her to transfer her will into L'Isle Adams so they can disobey their programming and instead follow her orders), Energy Projection (Can create mana balls), Danmaku (Yasaka no Magatama allows her to create countless mana spheres at the same time), Longevity, Magic, Telepathy, Creation (Can create Ame-no-Murakumo no Tsuragi, two meters long swords made of light), Heat Manipulation (Ame-no-Murakumo no Tsuragi emits an intense heat that is able to melt walls), Power Nullification (Can nullify mana), Explosion Manipulation (Can create explosions that destroy any material related to mana), Self-Destruction (Her suicide technique)

Intelligence: Kazuko is a highly intelligent magician who has served as Empress for decades and has guided them to a blind fellowship that can easily cover up events the masses witness.