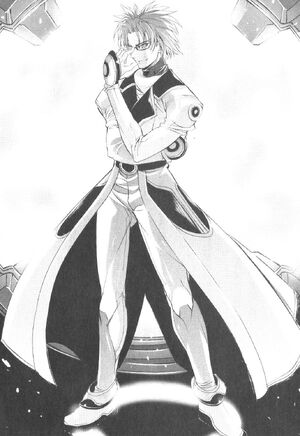 Kento Kurahashi, whose codename is USD, is an antagonist of Ichiban Ushiro no Daimaou. He's the strongest member of CIMO 8 who plans to carry Bouichirou Yamato's legacy. He's in love with Kei Sakura.

Attack Potency: At least Building level, possibly far higher (Due to being considered the strongest magician, he should be stronger than other members of CIMO 8 such as Rubbers; however, he's forced into defensive battles against opponents such as Act 12 Hiroshi Miwa)

Speed: At least Supersonic (Can dodge attacks from Act 12 Hiroshi)

Durability: At least Building level, possibly far higher (Was able to block an attack from Kei Sakura, but lost his arm in the process)

Intelligence: Genius. He graduated from Constant Magic Academy with the highest grades in the school's history. He won the Alpha Award which is the highest honor one can achieve in magical research and he is well-respected in other fields ranging from mathematics to art.