All Fiction Battles Wiki
Register
Don't have an account?
Sign In
Advertisement
in: Characters, Male Characters, Antagonists,
and 14 more 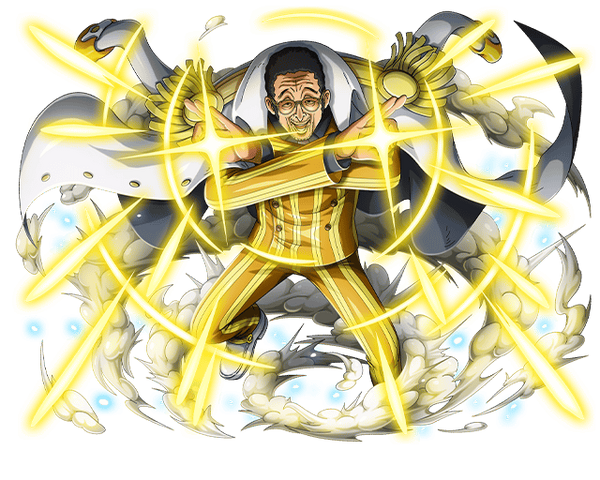 Borsalino, better known by the nickname Kizaru (and sometimes as the “Yellow Monkey”) is a “Supreme Admiral” of the Marine Corps, a military body that patrol the Grand Line and protect the world from piracy. He has somewhat of an absentminded and out-there personality, committing such acts as mistaking his snail wiretap for his phone, and politely asking the pirates who just shot at him if they could help him find his acquaintance.

Attack Potency: Continent level (Fought against Marco and tanked the latter's kick with no issues. Should be comparable to other Admirals, such as Akainu)

Speed: Speed Of Light travel speed when turning into light with FTL combat speeds (Can keep up with Rayleigh in a sword fight. Managed to react to Marco and blocked his kick. Blitzed Gear 2nd Luffy)

Durability: Continent level (Tanked a kick from Marco. Blocked Whitebeard's earthquake with the help of other Admirals)

Intelligence: Above Average (Borsalino is accomplished and highly experienced combatant and very proficient in the use of his Devil Fruit ability, and has enough strategic ability to hold the rank of admiral, commanding many marine forces)

Weaknesses: Cannot swim and will become massively weakened if his body is completely submerged underwater.