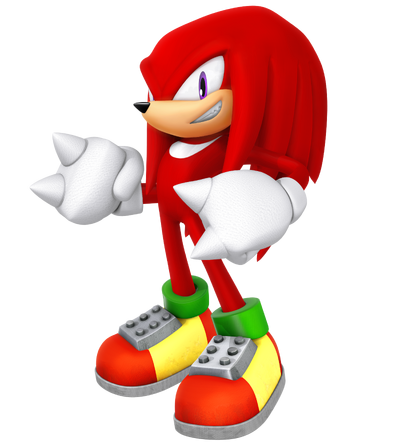 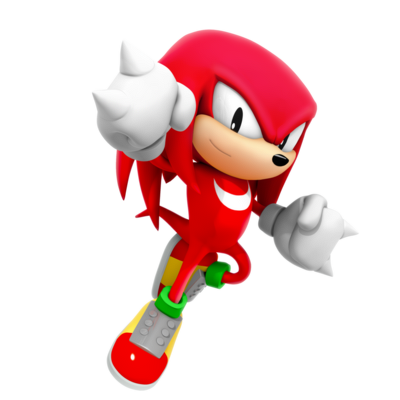 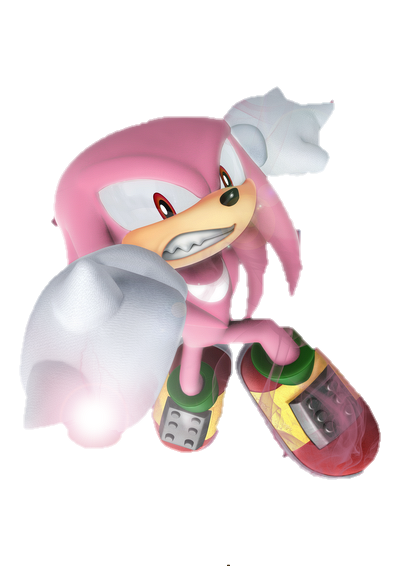 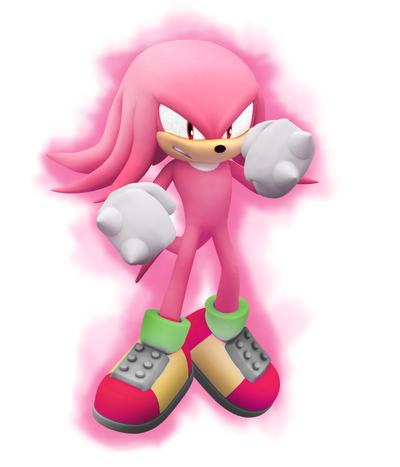 Knuckles the Echidna is a character from the Sonic the Hedgehog series. He's the rival of Sonic although most of the times he helps him in his adventures. He's also the last remaining descendant of the Knuckles Clan and the guardian of the Master Emerald, which he protects it with his heart. A loner by nature, Knuckles is independent, headstrong and serious, and still gullible and short-tempered to a fault.

Classification: Anthropomorphic Echidna, Guardian of the Master Emerald, Leader of the Resistance

Superhuman Physical Characteristics, Martial Arts, Self-Sustenance (Type 1), Hammerspace, Forcefield Creation (Of the fire and electricity varieties), Statistics Amplification (Can enhance his movement speed with Speed Shoes), Size Manipulation via Grow and Shrink, Teleportation (Can swap positions with his opponent with the Swap Monitor), Underwater Breathing (Type 3; With the Aqua Shield), Attack Reflection (With the Elemental Shields, which can all reflect small projectiles off of it), Fire Manipulation (With the Flame Shield), Statistics Amplification (Via Hyper Mode), Explosion Manipulation and Light Manipulation (Via Flash), Invulnerability (With the Invincibility Monitor), Can sense the Master Emerald whether it was broken or not, Chaos Emeralds, and even Sol Emeralds, Can use the Master Emerald and control its powers, Can glide through the air and dig through the ground, Surface Scaling, Resistance to Extreme Cold, Cosmic Radiations (Unaffected by the environment of space), Poisons and Chemical Products (Can travel through the most dangerous areas of Chemical Plant Zone without any trouble), Status Effect Inducement (The Invincibility Monitor grants a resistance to other Power-Ups, which includes Amy’s Heart Attack), Energy and Electric Attacks (With the Thunder Shield), Extreme Heat (Unfazed by the volcanic temperatures of Lava Reef Zone), Pseudo-Resistance to BFR (By just touching a Chaos Emerald, Tails will escape from being trapped in closed off dimensions).

Same as before, Homing Attack, Vehicular Mastery, Weapon Mastery, Afterimage Creation via Boost Mode, Paralysis Inducement, Can punch the ground hard enough to create an omnidirectional shock wave that disorientates, dizzies opponents, or causes a small volcanic eruption, Can see invisible objects with his Sunglasses, Non-Physical Interaction (Can hurt ghosts and spirits; Was able to harm King Boom Boo even after he had phased into the ground), Limited Electricity Manipulation (Can summon lightning bolts), Earth Manipulation, Fire Manipulation, Regeneration (Mid. Can survive being crushed flat), Healing (Chaos Emeralds heal their users and restore consciousness when they get rendered unconscious), Limited Time Manipulation, Transmutation via Ring Time, Durability Negation (With Uppercut and the Ichikoro Gauge allows Knuckles to knock out the opponent in one hit once enough energy is transferred to it), Paralysis Inducement (Via Stun and with Power Flash, Knuckles paralyzes the opponent for up to ten seconds), Healing, Resistance to Gravity Manipulation, Extreme Heat (Can survive the heat of falling directly into a star), Energy and Electric Attacks (With the Thunder Shield), Death Manipulation (Can traverse through areas near Void and can interact with him, in which his presence alone killed off the life within the Nature Zone before it was restored), Time Stop (Able to move normally after hitting a Time Switch, which brings everything to a standstill and freezes the in-game timer).

Gravity Manipulation and Black Hole Creation (With the Gravity Band), Purification (Type 3 with Cure All Spray) Statistics Amplification (With Golden Gloves and Speed Bar), Healing (With Health Seeds, Health Roots, Health Leaves and Antidotes), Elemental Manipulation (Of Water, Electricity, Ice, Wind, and Earth varieties via elemental Rings), Fear Inducement (With the Spooky Charm), Resurrection (With Angel Amulet and Ring of Life), Life-Force Absorption, (With Nocturne Blade), Statistics Amplification (With Cheezlet and Blayze, attacks do much more damage), Damage Reduction (With Velk and Gibber, damage from attacks are greatly reduced), Healing (With Stebsly and Joy, vitality is regenerated over the course of a fight), Resurrection (With Ovus, their partner is automatically brought back up to three times in one battle), Probability Manipulation (With Koolet, Belgog, Fimbley, and Stugs, enemy attacks have a greater chance of missing. Churdle and Oldarg give a higher chance of hitting the opponent. Keroyo increases the chance of an enemy fleeing. Spartoi grants a chance to instantly knock out the opponent with every attack done), Shield Creation (Can make passive shields of fire, water, wind, lightning, and earth that stay even after being hit), Elemental Manipulation (Can imbue his attacks with fire, water, wind, earth and ice), and Damage Transferal (With Pooki, damage taken is split between teammates). With the Color Powers: Transformation, Fire Manipulation and Explosion Manipulation (With Red Burst and Black Bomb), Vibration Manipulation (With Blue Cube and Gray Quake), Energy Projection (With Cyan Laser and Crimson Eagle), Electricity Manipulation (With Ivory Lightning), Invisibility (With Jade Ghost), Transmutation, Deconstruction, Black Hole Creation, Gravity Manipulation, Size Manipulation, and Absorption (With Indigo Asteroid, Violet Void, and Purple Frenzy), Intangibility (With Violet Void and Jade Ghost), Flight and Levitation (With Crimson Eagle, Green Hover, Indigo Asteroid, Magenta Rhythm, Orange Rocket, and Violet Void), Void Manipulation (With Violet Void). With Forcejewels: BFR, Barrier Creation (Can create barriers for a limited amount of time that others can't pass), Teleportation (Can teleport others to himself, teleport himself to others, swap places with an opponent, or teleport himself or others to a random location), Body Puppetry (Can force an opponent to move or use their items). With various Power-Ups: Homing Attack with Mines, Fire Manipulation with Fire, Ice Manipulation with Ice, Electricity Manipulation and Paralysis Inducement with Lightning, Perception Manipulation with Illusion, and Limited Magnetism Manipulation with Magnet. Resistance to Status Effect Inducement (With the Immunity Idol)

All of the previous abilities on a dramatically enhanced scale, Self-Sustenance (Type 3), True Flight, Spaceflight, Aura, Afterimage Creation (Passive. Has a constant afterimage), Invulnerability, Chaos Energy Manipulation, Positive Emotions Empowerment, Passive Forcefield, Resistance to Mind Manipulation and Existence Erasure(As being empowered by the Chaos Emeralds, Knuckles should be able to resist Time Eater's erasure capabilty, as one Chaos Emerald could)

All abilities of Super knuckles on a greatly enhanced scale, Afterimage Creation (Enhanced from before, as he now has multiple constant afterimages that follow him), Shockwave Generation (With the Gliding Shockwave Attack, Hyper Knuckles causes devastating tremors that damage all enemies in his vicinity)

Attack Potency: Large Planet level (Fought Classic Sonic, Classic Tails and Mecha Sonic) | Large Planet level (Somehow stronger than Sonic, and proved himself able to match him when in combat. Also fought Team Dark in Heroes), higher with the Maximum Heat Attack (Like the Light Speed Attack, the Maximum Heat Attack doubles and upgrades the damage that Knuckles is able to output) | Small Star level (Remains and will always be a rival of Sonic, who defeated Ultimate Emerl in his base form in Sonic Battle), higher with the Maximum Attack, Universe level+ with Super Shield (Was given a Super empowerment by Super Sonic so that they could defeat Metal Overlord) | Universe level+ (As he uses the same power source, the Chaos Emeralds, he should be about equal to Super Sonic. Scales to the Final Egg Blaster which could destroy dozens of stars in one shot (Defeated the Phantom King in his Super Form, who could create pocket realities such as the Egg Reverie Zone and Null Space which has an infinite space-time) to Low Multiverse level (Should be capable of achieving the same level of power that Modern Super Sonic used to defeat the Egg Salamander and the Time Eater), potentially Multiverse level (Can potentially use the full power of the Chaos Emeralds, which allowed Super Sonic, Super Shadow and Super Silver to match and defeat Solaris) | Multiverse level (Is vastly above full powered Super Knuckles and should be at least comparable to Hyper Sonic)

Speed: FTL+ (Can keep up with Classic Sonic and maybe even blitz him) | At least FTL+ (Superior to Classic Sonic. Can keep up with Modern Sonic's as a casual run, and should be at the very least comparable to Tails' speed movement speed wise) with FTL+ reactions and combat speed (Can react to and keep up with even Sonic's attacks. Although he lacks the quickness Sonic has. Sonic has said in Sonic Battle that Knuckles is "easily read", the Maximum Heat Knuckles attack is like the Light Speed Attack made by Sonic) | Likely FTL+ (While not as fast, he is still most likely comparable to Sonic) | Massively FTL+ (Is far swifter and faster compared to his base form, which can already keep up with Sonic), potentially Immeasurable (Comparable to full power Super Sonic who managed to hit and beat Solaris before he could even react) | Immeasurable (Far faster than Super Knuckles and comparable to Hyper Sonic through scaling, he should also be comparable to most of Sonic's feats)

Lifting Strength: At least Class 10 | Class M (Physically stronger than Adventure/Modern Sonic and Shadow. Helped stop the very Riot Train, a massive locomotive) | Class M | Pre-Stellar (Is far superior to the Hyper-Go-On energy that the Wisps use) to Unknown, potentially Immeasurable (Comparable to Super Sonic, who can push back and beat Solaris) | Immeasurable (Far stronger than Super Knuckles, who's comparable to Super Sonic)

Stamina: Very high, among the highest on Sonic's team. Limitless as Super and Hyper Knuckles

Intelligence: Above Average (Seems to have extensive knowledge of ancient civilizations, as he was able to translate an ancient language in the Gigan Rocks, skilled combatant as he is a martial arts master as he fought multiple armies of the Nocturnus Clan, and he's an amazing treasure hunter. Although his intelligence fails him some times when he manages to get tricked by Eggman many times.)

Weaknesses: His attacks are readable as stated by Sonic and a little naive (trusts individuals like Eggman even when he tricks him many times) | None notable | None notable