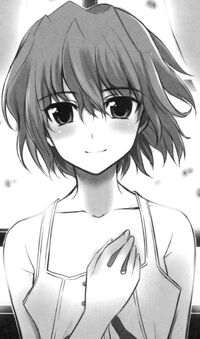 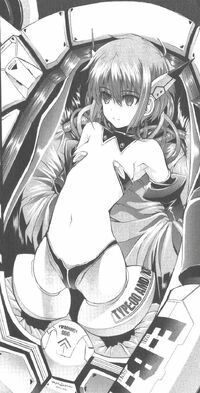 Korone is one of the protagonists of Ichiban Ushiro no Daimaou. A L'Isle Adam who was commanded to observe Akuto, she enrolled Constant Magic Academy as one of his classmates.

Powers and Abilities: Superhuman Physical Characteristics, Weapon Mastery, Dimensional Storage (Keeps a large amount of tools inside of her bag), Poison Manipulation (Her bazooka can scatter a drug over a wide area to poison an enemy unit), Healing, Limited Telepathy (Can only read other's emotions), Extrasensory Perception (Uses a radar to detect other people's mana), Enhanced Senses (Can see in the dark and has an x-ray device), Teleportation, Mind Manipulation (Her attacks don't deal much damage, but mental shock instead), Resistance to Soul Manipulation (Lacks a sense of self – aka, a soul) | All previous, Electricity Manipulation (Can struck her foes with lightnings), Energy Projection (Can shoot energy beams), Paralysis Inducement (Her stun stick incapacitates those who are stroke by it); As Armored Korone she gains access to: Flight, Large Size (Type 0), Air Manipulation (Can create shockwaves), Can bypass forcefields

Lifting Strength: Class 5 (Should be comparable to Zero's L'Isle Adams)

Standard Equipment: Her bag, which contains: a healing gun, a bazooka, a disaster prevention cloak, a metal bat, a staff-shaped laser beam, a stun stick, an x-ray device

Intelligence: L'Isle Adams have access to records of the government, which combined with Korone's intuition, leads her to have a very high deductive ability.

Weaknesses: Can be turned off if the switch on her tail is pulled. Her program forbids her from attacking humans. Evil Bane Hammer doesn't cover her full body, leaving an opening with the same durability as the regular Korone.