All Fiction Battles Wiki
Register
Don't have an account?
Sign In
Advertisement
in: Characters, Male Characters, Protagonists,
and 54 more 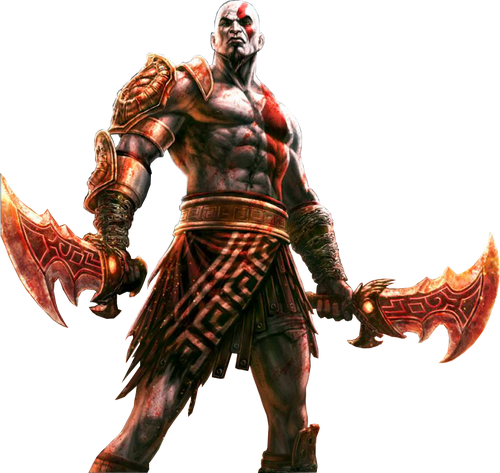 Kratos is the main protagonist of the God of War series. Born in Sparta, Kratos was a respected soldier and a Spartan General, up until he lost his wife and daughter when he killed them, albeit by accident, under Ares' command, earning him the nickname of "The Ghost of Sparta", after which he renounced his service to the War God, eventually killing him and ascending to Godhood before exacting revenge against his father, the Olympians and the Titans who betrayed him.

After the events of the God of War 3, Kratos escaped into the world of Norse Gods by settling down in Midgard in Ancient Norway where he married another woman named Faye and bore a son named Atreus who together, after the boy's mother’s death, would embark on a journey to spread her ashes at the highest peak of all the nine realms.

Superhuman Physical Characteristics, Weapon Mastery (All types), Martial Arts (Type 4), Rage Power (Types 1 and 2), Flight (Able to fly with Icarus's Wings), Electricity Manipulation (Poseidon's Rage creates a lightning strike that blasts through Kratos and electrocutes anything in a few meters range. Can throw lightning bolts with Zeus's Fury. Cronos' Rage creates an orb of lightning that targets multiple enemies and explodes once its over), Fire Manipulation, Petrification (Meduza's Gaze allows Kratos to petrify his enemies. Can create a shockwave that instantly petrifies the surrouding enemies. Can fire beams that instantly turns the enemy into stone), Summoning (Can summon flying souls that chases and attacks his opponents. Barbarian Hammer can summon souls and cause earthquakes. Can summon flying skulls, Olympus' sentries, Gorgon serpents, chimeras and centaurs, Can summon a phalanx of Spartan spirits shield Kratos while attacking with spears and dozens of arrows spawning from above. Oat Stone of Orkos can create a black energy clone of Kratos that teleports around and attacks his enemies), Water Manipulation (Divine Reckoning summons a whirling vortex with the Blade of Olympus), Time Manipulation (Amulet of Ouroborus creates a sphere where time is slowed down, with a target at its epicenter, in addition of being able to rewind time), Attack Reflection (Can block and reflect back attacks and projectiles with Helio's Shield. Golden Fleece blocks, absorbs and reflects back projectiles), Underwater Breathing (Poseidon's Trident allows Kratos to breathe underwater indefinitely), Energy Projection (Can fire multiple energy blasts with the Blade of Olympus), Homing Attack & Air Manipulation (Typhon's Bane can shoot homing arrows and create tornadoes), Non-Physical Interaction (Capable of harming wraiths), Soul Manipulation (Can rip out souls and absorb them), Shockwave Creation (Can create powerful shockwaves with Nemean Cestus), Light Manipulation (Can blind and stun enemies with a flash of light from Helios' head), Statistics Amplification (Can increase his speed with Hermes' Boots), Surface Scaling (Can run on walls), Pain Tolerance (Type 2. Was fine after getting hit in the throat with a slash. Was still alive for a couple of minutes after being impaled by Ares. Capable of taking massive amounts of electricity), Animal Manipulation (Can summon animals to do the wielder's bidding), Transmutation, Mind Manipulation & Power Nullification (Can summon the Arms of Hades which transforms the alive into mindless soldiers and strips people of their powers), Life-Force Absorption (Can cause this effect with the Blades of Chaos), Acausality (Type 1. Unaffected by Zeus killing his past self when he time travelled)

All previous abilities, plus Accelerated Development (Becomes stronger and faster over time), BFR & Power Mimicry (Can send his targets into a pocket dimension where they have to fight a bunch of clones that can replicate the target's powers), Soul Manipulation (Eye of Atlantis can destroy both spirit and body of those subject to it's searing blast), Shapeshifting (Can change his size), Large Size (Type 2), Vibration Manipulation (Atlas' Quake allows Kratos to create localized earthquakes, shattering his surroundings and sending boulders flying), Madness Manipulation (Can drive one mad with a Siren's voice), Poison Manipulation (Can summon chimeras who can spit acidic poison), Resistance Negation (Golden Fleece's reflection was able to ignore Gorgons' resistance to petrification), Time Travel, Invisibility Negation (Helios' Head can reveal invisible targets)

Superhuman Physical Characteristics, Martial Arts (Type 4), Weapon Mastery (All types), Immortality (Types 1, 3 and 4), Absorption & Attack Reflection (Guardian Shield can absorb and redirect projectiles and physical attacks back to the opponent), Non-Physical Interaction, Time Manipulation (When with the Amulet of Kvasir, a last second dodge will activate Realm Shift, which slows down time for several seconds), Regeneration (Low-Mid), Limited Telekinesis (Can call back his axe from any distance), Ice Manipulation (The Leviathan Axe can near-instantly freeze targets. Can cast a long range ice beam. Strike of the Utgard axe slashes sending out wide freezing waves. Ivaldi's Anvil is an area-of-effect attack that freezes the enemies caught in the blast radius. Breath of Thamur is a massive area-of-effect attack that deals freezing damage to all enemies within a large area), Homing Attack (With glaive storm, the Leviathan Axe automatically seeks out and hits the enemies, inflicting freezing damage), Fire Manipulation (The Blade of Chaos are imbued with never-ending fire magic. Can cast fiery blast of energy that burns the target. Can rain down fireballs with Meteoric Slam), Explosion Manipulation (Can cause an explosion of fire with Nemean Crush, Tartarus's Rage and Hyperion Slam), Shockwave Creation (Can perform multiple powerful fire shockwaves through the ground. While in Spartan Rage, can blast away enemies in front of him by slamming down in the ground with extreme force), Life Absorption (Gift of Apollo temporarily enhances the blades of chaos so that every hit heals Kratos. Spartan Rage also has this effect), Damage Reduction (Sinmara's Cinder prevents Kratos's attacks from being interrupted, reduces the amount of damage he takes, and inflicts normal and burn damage to all nearby enemies), Statistics Reduction (Talisman of Cursed Power unleases a wave of Cursed Mist that instantly weakens all surrounding enemies by lowering their overall Stats), Electricity Manipulation (Grip of Tanngiost strikes with an explosion of lightning that inflicts shock damage to all nearby enemies on any successful axe hit), Energy Projection (Hel's Tocuh can release an extremely quick burst of energy that interrupts and knocks back all nearby enemies), Invulnerability (With Ares's armor set), Acausality (Type 1)

Attack Potency: Island level (Defeated the Furies who were capable of creating a dimension with an entire sea inside it) | Universe level+ (Capable of overpowering and killing Thanatos, who is a primordial. Primordials such as Uranus, created the universe with sheer movement. Could fight against Cronos, who had previously fought against and defeated Uranus. Later he managed to kill Zeus, who is stronger than Cronos and the other titans), likely Multiverse level+ (Likely stronger than his norse counterpart due to beating Zeus, who was stated to be stronger than Baldur) | Universe level+ (Comparable to before. Capable of destroying Mattgur's totem with sheer power, which holds the very energy/power of the entire Helheim Realm), likely Multiverse level+ (His Leviathan Axe was created to rival Thor's Mjolnir in power. Thor was able to defeat Surtr, who with his sword, could cause the Ragnarok and erase all of existence, which is comprised of endless timelines, being all but a part of Yggdrasil. The Blades of Chaos were stated to be a weapon stronger than the Leviathan Axe)

Lifting Strength: Class G (Capable of breaking the strap that holds down a giant metallic serpent that spans across multiple mountain ranges) | Universal (Was able to push away through Atlas' grip) | Universal

Intelligence: Gifted (Has thousands of years of fighting experience, including against the supernatural. Has solved numerous puzzles throughout his adventures, most of them created by some of the most brilliant architects of his time, such as Daedalus, who built the Labyrinth of Minos, and Pathos Verdes the 3rd, who built the Temple of Pandora. Capable of brutally killing his enemies in the most creative ways)

Weaknesses: Can be prone to reckless and needlessly violent behavior if angered | None notable

Keys: Demigod | As the God of War | Norse Kratos/GoW IV