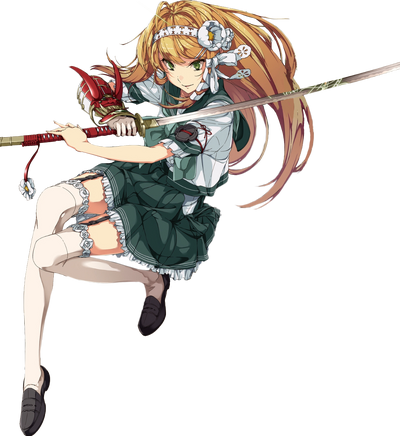 Kuchiba Hatsumi is the cousin of Yakagi Suimei, and the hero of summoned by the Alliance who due to a malfunction in the summoning ritual lost almost all of the memories she had about herself with the exception of those about her sword.

She became in charge of the protection of the alliance along her companions and continued defending it without questioning anything until one day an unexpected visit occurred, her cousin Yakagi Suimei had also been, accidentally, summoned into the same world as her by another country but due to her amnesia she had no memory of him. When he then set out to try to help Hatsumi, it resulted more difficult than he imagined as due to her amnesia.

Powers and Abilities: Superhuman Physical Characteristics, Automatic Translation, Master Swordswoman, Stealth Mastery (Any skilled swordsman can conceal their presence), Enhanced Senses (The moment she garbs a swords all of her sense sharpen, being easily capable of instantly locating a concealed far away demon), Extrasensory Perception (Can sense the spirit of others which includes their emotions and intentions), Analytical Prediction (A swordswoman of her caliber should be able to track down the trajectory of an invisible sword despite a hyper-realistic illusion decoy that becomes more attention grabbing the better the senses of the opponent), Precognition (A true master swordsman has premonitions which allow them to sense attacks before they happen), Blessed (As a hero she has the blessings of Alshuna), Regeneration (Mid-Low Can heal from several deep wounds), Conceptual Manipulation (Type 1; The Kuchiba swordstyle can take down conceptual beings like apparitions), Non-Physical Interaction (Her sword style is effective against spirits), Limited Sense Manipulation (She eliminates all other sensory information to fight at maximum capacity), Perception Manipulation (Slows down her perception of time to see things in slow motion), Statistics Amplification (She can momentarily attack 24 times in an instant), Spatial Manipulation (Her sword style defies all logic and allows her to strike at opponents far outside her physical range), Illusion Creation (Creates an illusion of her sword to make opponents lose track of her sword, she can also fool others into thinking her attack is an illusion when it's an ethereal strike), Limited Attack Reflection (She can use the opponent's force against them), Aura (Her fighting spirit alone could cut down the enemy), Fear Manipulation (Fighting spirit can completely coward the opponent or even cause them to instinctually retreat and evade confrontation even if they lack the instincts of a fighter), Paralysis Inducement (Fighting spirit is capable of paralyzing those under its influence.), Power Nullification (Can negate type 9 immortality and intangibility as she could capture a demon general's true body which existed in another plane of existence), Resistance towards Memory Manipulation (Despite having lost all memory about who she was, her sword skill remained and instincts prevailed), Conceptual Manipulation (Type 1), Magic (The hero summoning ritual grants her protection by a power of a higher-order than magic), Mind Manipulation, Soul Manipulation (Can take attacks from apparitions and demons which attack the astral body, as well as being protected from dark magic), Empathic Manipulation (She casts aside the poisons of the human heart to fully concentrate on her sword), Extrasensory Perception, Analytical Prediction (Opponents can't get a read on her movements or her emotions, like still body of water she is perfectly serene despite being on guard in combat. Whoever approaches her was the one that created the ripples, not her), Madness Manipulation (Type 3; Heroes can be exposed to the resentment of the world akin to a sinister being without going insane), Possession (Those with divine protection have resistance towards being possessed), Power Nullification, Law Manipulation

Durability: Small Town level+ (Can fight those comparable to herself)

Range: At least several kilometers (The kuchiba sword style defies all logic of what should be out range for the user, allowing them to strike outside their physical range and even cut down something like a wall of clouds.)