All Fiction Battles Wiki
Register
Don't have an account?
Sign In
Advertisement
in: Toilet no Hanako-san vs Kukkyou Taimashi, Characters, Adults,
and 14 more

⚠️This character is from a verse that contains adult themes. Proceed with caution.⚠️

She is also an evil spirit and an urban legend who once became, according to her, a social phenomenon.

Powers and Abilities: Superhuman Physical Characteristics, Teleportation (Claimed that she could have appeared anywhere in an entire town), Fear Manipulation and Absorption (Stated that she is an embodiment of fear that resides in people's hearts and that the massive amount of fear from humans gives her its power), Resistance to Power Nullification (Kongou's semen infused with sacred spiritual power couldn't nullify her power from the beginning), Immortality (Type 1)

Attack Potency: At least Street level+ (As a powerful evil spirit, she should be far superior to ordinary human beings. Kongou was unable to defeat her all by himself and had to rely on the help of several ordinary people in order to do so. She was also one of the few evil spirits who came closest to defeating him)

Speed: At least Superhuman (As a powerful evil spirit, she should be far superior to ordinary human beings. She was shown to be fast enough to dodge a punch from Kongou)

Durability: At least Street level+ (Should have been able to take Kongou's punch. Should also be comparable to other evil spirits such as the Man-Faced Dog)

Stamina: Very High (Made Kongou chase her almost all over the entire town without showing any signs of tiring)

Weaknesses: Due to the fact that her power comes from the fear of others for her, if their impression of her is changed (As in Kongou's case when he revealed that she was just a perverted and lustful woman), she will no longer be able to absorb any fear that she could convert it into power (Thus allowing Kongou's semen infused with sacred spiritual power to nullify her power). She was also shown to be too confident in her power, as she did not seem to be worried about the fact that Kongou might have been able to discover her weakness. 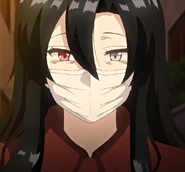