All Fiction Battles Wiki
Register
Don't have an account?
Sign In
Advertisement
in: Redo of Healer, Characters, Female Characters,
and 12 more 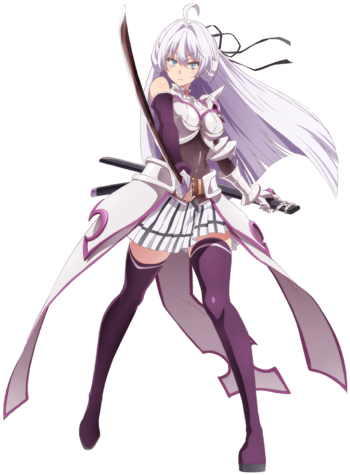 Kureha Clyret is a female knight of Jioral Kingdom, renowned as the Blade Goddess. She initially opposes Keyaru's party, but allies with them after learning of her kingdom's atrocities.

Powers and Abilities: Superhuman Physical Characteristics, Weapon Mastery (Type. 1, she’s extremely skilled with her sword and is the strongest swordsmen in the Jioral Kingdom), Extrasensory Perception (One of her abilities give her presence awareness), Enhanced Senses (She has battle senses that help her match people’s speed), Pain Tolerance (Type. 1, she was able to stab her own arm to help against the aphrodisiac effect).

Attack Potency: City Block level (She should be comparable to Blade, she is superior to Keyaru and Setsuna)

Speed: Hypersonic (She was able to move so fast that Keyaru could no longer see her)

Durability: City Block level (She should be comparable to Blade, she is superior to Keyaru and Setsuna)

Stamina: High (She was able to continually attack Keyaru and almost made him fatigued)