All Fiction Battles Wiki
Register
Don't have an account?
Sign In
Advertisement
in: Characters, Male Characters, Antagonists,
and 11 more 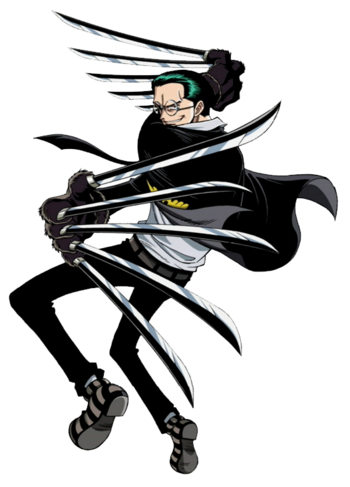 Kuro of a Hundred Plans, also known by his alias Klahadore, is the primary antagonist of the Syrup Village Arc. He was the caretaker of Kaya until his defeat, and the captain of the Black Cat Pirates before that.

Powers and Abilities: Superhuman Physical Characteristics, Weapon Mastery (Type 1), Stealth Mastery & Sound Manipulation (Kuro utilizes a soundless technique to silently kills his enemies. Not even 50 assassins would be able to detect him), Pseudo-Invisibility & Statistics Amplification (With Shakushi he becomes immensely faster than before. However, he cannot see where he is going, and as such, can't really discern his targets most of the time), Berserk Mode

Attack Potency: Large Building level (Superior to Buchi, who caused this much damage with his Flying Drop Kick. Capable of harming Luffy)

Standard Equipment: "Cat Claws", 10 katana - length blades attached to the tip of each finger on gloves

Intelligence: Gifted (Great strategist, was known for his plans never failing and manipulated many people and faked his death)

Weaknesses: When using Shakushi, he cannot see where he is going and attacks randomly, he goes into a berserker rage and attacks anyone, even allies, when he sees a crescent moon.