All Fiction Battles Wiki
Register
Don't have an account?
Sign In
Advertisement
in: Characters, Female Characters, Humans,
and 28 more 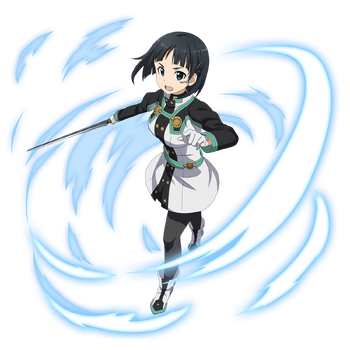 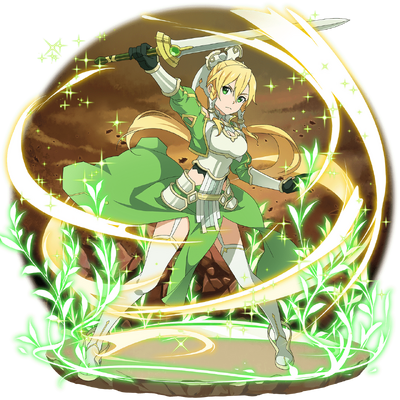 First debuted in Sword Art Online Novel #3, Leafa was the main deuteragonist for the ALO Arc. She goes through her own internal struggle in the Arc but at the end, she makes peace with her situation.

Skilled Swordswoman in AR/real life. In VR she has everything from her ALO key

Same as before, with the addition of Superhuman Physical Characteristics, Accelerated Development (Leveling; Abilities), Regeneration (Low-Mid over time (All VR Avatars can regenerate entire limbs within 2-3 minutes)), Damage Boost (All attacks have either a low chance of critically hitting the opponent or hitting a weak point to critically hit them, dealing even more damage. The two forms of critical hits can stack), Statistics Amplification (Sword Skills amplify the user's speed and power, with the downside of having a post-motion stun for a brief period of time afterwards. Sword Skills aren't available pre-New Aincrad), Status Effect Inducement (via Sword Skills. If one can directly land a Sword Skill on an opponent towards a vital point such as the head, the opponent will be stunned for upwards of 10 seconds), Healing (Accelerating recovery via Recovery Potions over a period of 5 minutes), Status Effect Inducement Nullification (via Antidote Potions. Only works against debuffs on Leafa's power or below), Magic (Mostly consisting of wind magic, though she has access to healing magic too), Flight (For 10 mins before requiring to land pre-New Aincrad. Unlimited flight post-New Aincrad), Enhanced Senses (via Magic), Illusion Creation, Elemental Manipulation, Stealth Mastery, Forcefield Creation, Statistics Amplification, Homing Attacks, Immortality (Type 2), Hypermobility (VR Avatars do not have muscles and insides like real people do. Thus, they are able to do impossible motions that people in real life would not be able to do), Limited Reality Warping (via Proto-Incarnation. In times of extreme brain activity reaching to one's Fluctlight, or soul, the user can temporarily enact change on the world to an extent via their willpower or imagination. Usually, it has been displayed to enact improbable feats, such as delaying death, breaking out of system paralysis, bypassing system-enacted rules, and more that can be described as "surpassing the system"), Resistance to Pain (All virtual reality avatars have a pain absorber, which lessens the amount of pain one feels to negligible amounts, even with injuries such as decapitation)

Superhuman Physical Characteristics, Accelerated Development (Leveling; Physical Stats, Abilities), Immortality (Types 2 and 3. Super Accounts have an extremely massive pool of Life, meaning that normal fatal wounds such as holes where vital organs should be or torn limbs will not kill them. With Incarnation, a Super Account can heal off most wounds instantly), Statistics Amplification (Sword Skills amplify the user's speed and power, with the downside of leaving a small post-motion delay), Regeneration (At least Mid, likely higher. Her account's theme is based around nigh-unlimited HP and infinite regeneration, making it insanely hard to kill her), Healing (At least Mid, likely higher), Magic & Creation (via Sacred Arts. Can create a spell or an object for almost any situation, so long as she knows the words used to arrange her thoughts, guide her emotions, and fuel her imagination to create said spell or object. Using a Super Account, Leafa does not need an incantation to use Sacred Arts), Elemental Manipulation (via Sacred Arts), Homing Attacks (via Sacred Arts. Can make her attacks home in on enemies). Immortality (Type 8; Characters in the Underworld can't die as long as their fluctlight isn't destroyed), Passive Reality Warping (via Incarnation. As with all VR avatars, especially in the Underworld, Incarnation grants all the ability to alter reality via their conscious and subconscious belief and willpower, and can be described as many people sharing a single dream, with greater control of Incarnation being likened to "lucid dreaming"). The primary applications of Incarnation are as follows: Empowerment, Statistics Amplification and Statistics Reduction (Belief in one's own strength will amplify one's own power, however the opposite can happen to the user as well if they are not confident in a matchup), Limited Law Manipulation (If enough people believe that something cannot happen, it will become impossible and vice versa), and Probability Manipulation (If an Incarnation user truly believes that they are weaker than their foe, even subconsciously, reality will be rewritten to ensure their defeat (and vice versa). If both sides are both completely confident in a battle, it will be a battle to see who's mental willpower is stronger than the other). For Leafa, additional applications are as follows: Spatial Manipulation (Can increase the range of her attacks via Incarnation), Unconventional Resistance to Soul Manipulation and Matter Manipulation (The souls in Sword Art Online are described as being made of quantum fields)

Attack Potency: Athlete level in AR/real life (She's a kendo National Quarter-Finalist. Beat Kirito in a sparring match, and Kirito himself noted that she's scarier than Heathcliff). City Block level in VR (Can harm An Incarnation of the Radius) | At least Small Building level (Though ALO bosses are stronger than SAO ones, the gap is not significant enough to be meaningful. Currently, the ALO clearing group is around the 30s in terms of floor number) | At least Wall level, higher with Incarnation (Should be comparable to Stacia)

Standard Equipment: Her sword (ALfheim Online only), The Augma (A device that allows the user to use Augmented Reality technology. Real life only), Verduras Anima (Her sword in the Underworld)

Intelligence: Suguha is a nationals level kendo practitioner, allowing her to have the clear combat advantage when it comes to pure one on one sword fighting. Otherwise, average academically.

Weaknesses: Sword Skills have a slight post-motion stun at the end of them in exchange for increased power. Extensive use of her healing powers will strain Leafa so much to the point where it will damage her soul (Alicization Key Only). Because of Incarnation's passive nature based on the imagination and willpower of the individual, at worst, if the user thinks a situation is hopeless or impossible to succeed, Incarnation will instead have a negative effect and make that situation true.

Outside System Skills (OuSS): As its name suggests, are skills that are the users own, unlike Sword Skills and magic that are provided for by the game engine.

Magic - Allows the user to use race-unique and Alfheim standard magic. Leafa, as a Sylph is naturally inclined towards wind magic and stealth magic but she also uses standard elemental magic to imbue her swords with it. She has shown to know healing and strengthening spells as well.