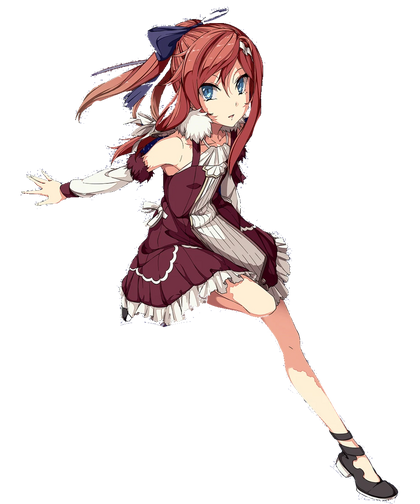 Lefille Grakis is the Shrine Maiden of Noshias and the only living member of their royal family and country after having been assaulted by the vanguards of the Demons lead by general Rajas. She barely managed to escape the assault at the cost of the lives of many of her people, but even then she did not escape fully safely as a curse was placed on her that can only be lifted upon the death of the demon general.

Much later on she has a fateful with Yakagi Suimei after having an oracle tell her what the goddess Alshuna wanted her to do. This eventually leads to an important series of events that question her decisions, the value of her existence and the beliefs about the limits of magic.

Powers and Abilities: Superhuman Physical Characteristics, Master Swordswoman (Lefille is a master swordswoman), Stealth Mastery (Any skilled swordsman can conceal their presence), Enhanced Senses, Extrasensory Perception (Can sense presences and the spirit of others which includes their emotions and intentions), Analytical Prediction (She can track down the trajectory of an invisible sword despite a hyper-realistic illusion decoy that becomes more attention grabbing the better the senses of the opponent), Precognition (A true master swordsman has premonitions which allow them to sense attacks before they happen, and her advanced instincts allows her to predict the future outcomes of the battle), Intangible Attacks (Mystical substances are different from physical substances and as such cannot be defended against using only conventional physical means), Awakened Power (The power of the spirits resides within her which she can draw out if necessary, though not without consequence), Blessed (As the shrine maiden has she has the blessings of Alshuna), Air Manipulation (Can generate wind), Non-Physical Interaction (Can interact with the mystical), Conceptual Manipulation (Type 1; Can harm conceptual existences like the apparitions with her red wind), Body Control, Intangibility (Capable of turning into a red gale), Vibration Manipulation (Can create shockwaves with the power of the telesma), Deconstruction (Can produce shockwaves that reduces the opponents into mere ash), Forcefield Creation, Aura (Her overflowing power of the spirits create a barrier around her that protects her from incoming attacks; Her fighting spirit alone could cut down the enemy), Law Manipulation, Power Nullification (The power of the spirits grant her automatic rank disparity extinction a universal law that shuts down mystic phenomena of others), Fear Manipulation (Fighting spirit can completely coward the opponent or even cause them to instinctually retreat and evade confrontation even if they lack the instincts of a fighter), Paralysis Inducement (Fighting spirit is capable of paralyzing those under its influence. Her gaze alone can instantly paralyze a battalion of soldiers and mages), Resistance towards Conceptual Manipulation (Type 1), Magic (Magic results ineffective against her who has the power of the spirits within her body), Paralysis Inducement, Fear Manipulation (Can withstand the effects of other's fighting spirit), Soul Manipulation and Mind Manipulation (Capable of taking hits from the demons and Rajas' miasma which destroy the astral body)

Attack Potency: Small Town level+ (Capable of splitting mountains, even after seeing Suimei's power she did not consider him strong enough to fight Rajas compared to her and would die instantly) | Mountain level (Slightly inferior to Rajas)

Durability: Small Town level+ (Took hits of those comparable to her) | Mountain level (Took hits from Rajas and Sister Clarissa)

Stamina: High (Capable of fighting the members of the Universal Apostles and Apparitions from daytime until twilight; She could singlehandedly wipe a division of thousands of demons)

Range: Extended Melee range with her sword with (180 cm long ), up to several kilometers with her red wind (Capable of cleaving the heavens)

Intelligence: Gifted (Skilled swordswoman who has spent most of her life honing her ability with the sword to the point of reaching the level of the seven swords in terms of sword-skill, people who are the pinnacle of swordsmanship in her world. Her intuition with her sword allows her to practically read the future and accurately track the movement of an invisible sword whilst simultaneously being assaulted by decoy in the form of a hyper realistic illusion which catches the attention of the opponent further the more enhanced the senses of the opponent are)

Weaknesses: None notable | After the power of the spirits runs out she transforms into a child version of herself, albeit her physical body technically remains the same but the way she is drawn into reality changes.

Key: Base | Full Power Of The Spirits