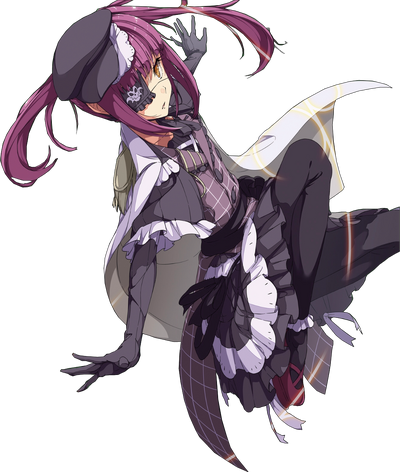 Liliana Zandyke was a member of the intelligence agency of the empire, and was the culprit of the mysterious comas that some important people within the empire were being put under.

After meeting Suimei and coming to appreciate him she becomes distressed when she has to face him as he was tasked with the duty of finding and stopping the culprit of the incidents. However everything her fate seems to have her doomed she is saved by no other than Suimei himself and becomes one of his disciples under Magicka and companions.

Superhuman Physical Characteristics, Genius Intelligence, Sound Manipulation, Magic, Conceptual Manipulation (Type 1; Magic calls upon the power of the wide concept known as The Elements and borrows smaller conceptual attributes from it to function. The Elements exists outside the world while also enveloping it. Dark magic is stated to draw out the resentment mixed with The Elements and dark magic is said to coagulate in the astral plane. The Astral plane contains all creation), Intangible Attacks (Mystical substances are different from physical substances and as such cannot be defended against using only conventional physical means), Non-Physical Interaction (Can interact with the mystical. Mystical attacks employ the concepts known as the Elements, and thus is conceptual and can't be defended by physical means), Enhanced Senses (Has sharp senses akin to a net of threads on her surroundings that allow her to dodge a barrage of invisible attacks), Instinctive Reaction (Her body can move on its own), Weapon Mastery, (Skilled swordsman), Extrasensory Perception (Can sense mana and spells), Statistics Amplification (Savage names can amplify the potency of spells), Homing Attack, Empowerment (Dark magic uses the negative emotions of humanity), Forcefield Creation, Fire Manipulation(Can use fire magic), Air Manipulation (Can use wind magic), Darkness Manipulation (Can manipulate darkness), Sense Manipulation (Can create a zone of hat obscures the senses of those who enter it, including extrasensory abilities and clairvoyance), Stealth Mastery (Can suppress her presence and noise; Even lacks a spiritual presence), Flight (Can sow together darkness to fly), Probability Manipulation (Phenomena Mixer causes the manifestation phenomena to become uncertain and fail to manifest in the first place or turn on its user), Curse Manipulation, Mind Manipulation, Soul Manipulation (Her attacks directly target the astral body), Biological Manipulation (Her dark magic causes the opponent's body to rot away and crumble), Corruption (After being struck by dark magic the condition quickly spreads through the body into the core of the body, resulting in death), Transmutation (Can turn others into a mass of darkness, Summoning (Sinister beings are forth from the astral plane by her vulnerability against malice), Sleep Manipulation (Her malice causes others to faint even causing them to foam from the mouth; She can also force others to fall into a coma), Corrosion Inducement, Acid Manipulation (Her mana melts away things under her influence as if exposed to chemicals), Technology Manipulation, Law Manipulation (Her body which is steeped in mysteries has an adverse effect on physical-laws which causes things that rely on them to malfunction; Capable of activating rank disparity extinction), Negation of Non-Physical Interaction (Dark magic are mere corrupted thoughts that bypass even magicka defenses), Resistance towards Magic (To even touch upon a mystery one must have a degree of resistance towards it), Conceptual Manipulation (Type 1), Sleep Manipulation, Sense Manipulation (Unaffected by the zone of darkness), Curse Manipulation, Corruption, Mind Manipulation, Soul Manipulation (Resistant to the effects of dark magic), Madness Manipulation, Death Manipulation (Survived the of a sinister being which would have killed any normal person with just its presence), Law Manipulation (Can use magicka working under different laws from the ones of the world)

All the previous abilities enhanced in addition to Enhanced Senses (Can see astral beings like the shadow of Astaroth), Telekinesis, Flight, Sound Manipulation (Capable of creating sound isolating barriers), Astral Projection (Can extend her astral body to strike at the opponent's), Air Manipulation (Can wrench the air), Spatial Manipulation, Black Hole Creation (Dark magic allows her to create miniature black holes that warp space and eat it away), Sealing (Can seal away the opponents and their magicka into a muddy bog that acts as cursed burial), Aura (Can exert mana pressure on the opponent), Fear Manipulation (Can induce pressure on the psyche), Paralysis Inducement (Her aura can paralyze her opponents or physically bind them in place. Negative touch paralyzes anything Lilliana even grazes) Power Nullification (Capable of dispelling; By triggering rank disparity extinction, a universal law that shuts down lower-ranking phenomena. By extending her aura she can obstruct the activation of magic), Invisibility (Can render herself and others invisible), Perception Manipulation (Concealment magicka works to make others subconsciously ignore the existence of the user even if they see them), Resistance towards Power Nullification, Law Manipulation (Can offset rank disparity extinction)

Superhuman Physical Characteristics, Abstract Existence (Type 1; Is the the personification of the resentment and ugliness of humanity), Immortality (Type 9; Its true self exists in the astral plane), Death Manipulation (The presence of the sinister being can kill), Fear Manipulation (Its presence causes indescribable dread that causes those who experience it to want to run away; its shrill voice plants unforgettable fear and discomfort on those who hear it), Power Nullification, Technology Manipulation, Law Manipulation(Her body which is steeped in mysteries has an adverse effect on physical-laws which causes things that rely on them to malfunction; Capable of activating rank disparity extinction.), Conceptual Manipulation (Type 1), Corruption (All that comes near it becomes corrupted with its malice), Sound Manipulation, Vibration Manipulation (Its voice turns into a shockwave that assaults the bodies of the opponents), Madness Manipulation (Its appearance and voice drives others into insanity), Resistance towards Law Manipulation, Power Nullification

Superhuman Physical Characteristics, Immortality (Type 8; Reliant on the concepts of the words that give it power), Abstract Existence (Type 1; Its existence is made up out of the concepts of words and take shape in the world with those), Natural Weaponry, Sound Manipulation, Vibration Manipulation (Can attack with his howl), Fear Manipulation (All those who hear its howl are overcome with fear just from it), Power Nullification, Resistance towards Spatial Manipulation, Black Hole Creation (Comes from beyond the warped space created by Lilliana), Power Nullification (Due to being classified as a charm it cannot be dispelled normally), Law Manipulation (High-ranking mysteries are resistant to rank disparity extinction)

Superhuman Physical Characteristics, Immortality (Type 8; Reliant on the concepts of the words that give it power), Abstract Existence (Type 1; Its existence is made up out of the concepts of words and take shape in the world with those), Flight, Natural Weaponry, Sound Manipulation, Power Nullification (The cacophony it produces disrupts spells), Duplication (Became over a hundred crows, Law Manipulation (Can trigger rank disparity extinction, a universal law that shuts down lower ranking mysteries), Resistance towards Power Nullification (Due to being classified as a charm it cannot be dispelled normally), Law Manipulation (High-ranking mysteries are resistant to rank disparity extinction)

Speed: FTL (Comparable to Yakagi Suimei; Superior to someone who can fire a water bullet faster than the mana-light could reach the eyes of the spectators. Dodge multiple of Suimei's light attacks) | FTL (Same as before)

Striking Strength: Multi-City Block Class+ (She is regarded to be almost just as deadly with the sword as she is with magic due to having been trained by a member of the seven swords) | Small Town Class+

Stamina: High (She was capable of fighting the members of the Universal Apostles and Apparitions from daytime until twilight.)

Range: Several Kilometers (Her mana can cover the townscape)

Intelligence: Extraordinary Genius (Even at her young age she is regarded as a terrifying genius by veteran magicians in her world, having relatively easily achieved power that should have taken years upon years of hard work to attain in a short amount of time. On top of that she is also terrifyingly skilled in other fields for her young age such as in her swordsmanship, having trained under one of the 7 greatest masters of the sword in the world and having become skilled in his techniques to a degree or her skill as one of the most important members of the information collection division of the empire. Even when compared to Felmenia Stingray. Suimei considers it to be like comparing a hard worker to a prodigy.)