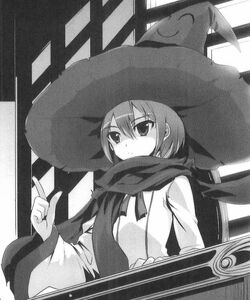 Lily Shiraishi is one of the protagonists of Ichiban Ushiro no Daimaou. She's the Student Council President of Constant Magic Academy who wants to keep the legacy of the previous Demon King intact in the name of the government.

Powers and Abilities: Superhuman Physical Characteristics, Magic, Air Manipulation (Can create tornadoes several dozen meters tall), Power Nullification (Can nullify remote mana attacks), Elasticity (She can enlarge her arm so it can reach foes 10 meters away from her), Spatial Manipulation (Special Spherical Beating summons a sphere of dozens of meters filled with a barrage of punches that pummel her opponent from all directions), Extrasensory Perception (Can detect the mana patterns of individuals, allowing her to sense them without seeing them), Flight, Telepathy, Gun Mastery

Speed: Subsonic (Her punches can cross 10 meters in 0.2 seconds), Supersonic with The Hard Punch (Stated to break the sound barrier and create sonic booms)

Intelligence: As the Student Council President of Constant Magic Academy, she is one of the best students in the whole academy, and is considered the most killed combatant of them.