All Fiction Battles Wiki
Register
Don't have an account?
Sign In
Advertisement
in: Characters, Beyond-Dimensional Beings, Immortals,
and 25 more 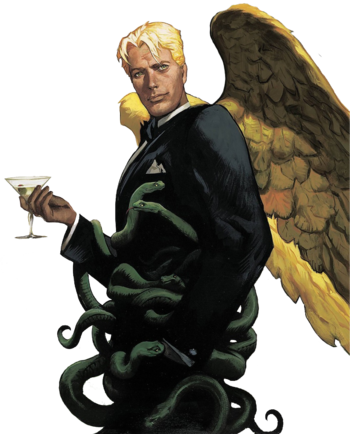 Lucifer Morningstar previously know as Samael is the main pratagonist of Lucifer comic series and an important charecter in DC/Vertigo Universe.

Eons ago, Lucifer Morningstar rebelled against the Kingdom of Heaven and was cast into a shapeless void known as the Chaoplasm. The Chaoplasm was transformed into a desolate and barren expanse known by many as Hell, the final destination for damned souls. Here Morningstar ruled, awaiting the day he could be freed.

Lucifer eventually abandoned his lordship over Hell. Searching ways to free himself from Yahweh's plan and have "true free will"

Age: Inapplicable. Predates all of Creation

Attack Potency: Unknown likely Ascendent level (Even when he was powerless, Lucifer was able to effortlessly kill Fenris, who torn through army of heaven and manifested himself in Yahweh's throne) | Ascendent level (Destroyed Logos which is the first word sung to creation by god, Lucifer ripped and burned pages from book of Destiny, which contains the entire existence, Dream of the Endless himself admitted Lucifer is superior to him. his mere presence destroyed the Silence Mansion which contains rejected creations, exists beyond every form of time and space and infinite layered axis. Lucifer ereased Silk Man with a thought, who continously destroys creationsand predates Yahweh's multiverse. Lucifer's powers are similar to those of Yahweh's)

Speed: Unknown, at least immeasurable with his wing (his wings allows him to transcend time and distance), possibly Irrelevant | Irrelevant

Standard Equipment: The Sword of Azazel

Intelligence: Nigh-Omniscient (Lucifer witnessed the story of creation, it was stated that he is borderline omniscient, he is an extremely cunning and manipulative individual who prefers to use his intelligence rather than getting his hand dirty)

Weaknesses: Can't create matter out of nothing in void, needs brother Michael Demiurgos to utilize his Lightbringer power. Prideful and narcissistic