All Fiction Battles Wiki
Register
Don't have an account?
Sign In
Advertisement
in: Characters, Male Characters, Antagonists,
and 47 more

Goëtz von Berlichingen (ゲッツ・フォン・ベルリッヒンゲン, Gettsu fon Berurihhingen), also known as Machina (マキナ, Makina), Nigredo: the Black Knight (黒騎士ニグレド, Kuro Kishi Niguredo), or Michael Wittman, is a member of the Longinus Dreizehn Orden, occupying Seat VII. An enigmatic man, with a past veiled in mystery and an equally mysterious relationship with Ren Fujii. He is also one of the Three Knights, one of three members of the Black Round Table awarded the honor of becoming an Einherjar under Reinhard Heydrich's command, serving as part of the commanding echelons of the Longinus Thirteen and an essential piece to the success of their goals.

He is a man of few words, and even fewer emotions. A being of perpetual sloth. Within the will of sorrow and apathy.

He sees no meaning in anything, and wants all to end. Manifesting as his Briah, Midgardr Völsunga Saga.

Superhuman Physical Characteristics, Martial Arts, Immortality (Types 1, 3, 5 and 8. Einherjar are immortal, the concept of death doesn't exist for them, and will fight for all eternity as long as Reinhard Heydrich exists), Regeneration (Low-Godly. Ewigkeit users can reform their bodies from their disimbodied souls and can regenerate from any damage as long as their soul is intact), Intangibility & Non-Corporeal (Can exist in a spiritual state), Self-Sustenance (Types 1, 2 and 3), Extrasensory Perception (Ewigkeit users are capable of seeing and comprehending what is normally invisible to the human eye), Enhanced Senses (His senses are beyond those of normal humans), Non-Physical Interaction & Soul Manipulation (Ewigkeit users can absorb and devour souls, as well as destroy them with mere conventional attacks. Can also interact with Methuselah who is the embodiment of darkness), Empowerment (Ewigkeit users becomes stronger as they eat souls), Law Manipulation (Briah users imposes their law into reality which can also overwrite the laws of Mercurius's world to an extent), Reality Warping (Ewigkeit users forces their deepest desires into reality through their Briah), Durability Negation (His attacks affects the body and soul), Regeneration Negation (Low-Godly. Ahnenerbe carries a poison that negates the regeneration of the soul), Willpower Manipulation & Poison Manipulation (Capable of melting his surroundings into a toxic waste through his will alone), Death Manipulation (Type 2. His punches can end one's life, which includes the soul), Resistance Negation, Conceptual Erasure (When his Briah is active, any of his punches can erase all creatures, object, knowledge, information and even concepts from history itself. Its the power to instantly end all phenomena with a single punch. Living beings and creatures, buildings, elements of nature like fire and lightning, even those such as thoughts and concepts like the god of darkness and dependent of Mercurius' Law, Methuselah, will all erased from existence regardless if they have a shape or not), Power Nullification (Managed to nullify Cain's form, returning him to his normal self. And forced Ren out of his Briah. Can render all weapon, armor, and magic futile), Overwhelming Aura (Can induce a tremendous spiritual pressure upon others), Resistance to Mind Manipulation, Fear Manipulation & Madness Manipulation (LDO members can fight and endure Methuselah's presence, who can cause others to go into madness just from looking, hearing or reading about his heritage, to the point that they and their future generations are cursed with the madness of his existence, causing them to either go insane, kill themselves or outright die due to the sudden shock of having all the mental fears implanted into them, which could affect even fetuses who were in their mothers womb), Soul Manipulation (On a scale of hundreds of thousands of souls), Biological Manipulation, Poison Manipulation (Apostles are naturally resistant to drugs and poison), Power Nullification (Ahnenerbe users can't be nullified), Disease Manipulation

All previous abilities on an unimaginably higher level, in addition to all the abilities and weaknesses of a Hadō God such as Superhuman Physical Characteristics (Are literal Gods that possess physical strength unimaginably greater than that of a human)

Likely Telepathy (All Hadō Gods likely have the same ability as Mercurius, who spoke to Shirou in his mind)

Attack Potency: Mountain level (Comparable to Eleonore. One-Shot Tubal Cain, who can shatter mountains. Much stronger than Wilhelm) | At least Large Planet level, likely higher (Stronger than a boosted Wilhelm, who could destroy Methuselah's Jaws of Darkness, which have a density of a hundred nights, with each night being equivalent to half of the planet) | High Ascendent level (He is boosted to the same level of existence of Reinhard Heydrich)

Stamina: Limitless (Einherjar have a limitless supply of life/soul from Gladsheimr)

Intelligence: Genius (Extremely proficient in the sorcery of Ewigkeit, being capable of commanding souls in a way that might surpass even Reinhard's own skill. Has decades of fighting experience)

Weaknesses: The power of his Ahnenerbe and Briah are all limited to his fists, and thus needs to hit someone in order for it to take effect. 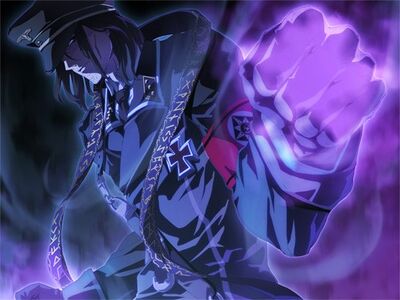 : Machina's Ahnenerbe, Special Type. Deus Ex Machina takes the form of his own body as the Ahnenerbe, formed from over 60,000 souls of Einherjar candidates he fought in Reinhard's castle along with the very same Tiger I Tank he and his best friend Lotus originally died in. It is the very embodiment of a tank, a symbol that represents him as a man whose body is not of flesh, blood, and bones, but of cold iron, gears and cables.

A constantly active Ahnenerbe similar to Trifa's Heilige Eohl, Deus Ex Machina brings an end to anything that has a history, from one's breathing and blood flow to even their very soul, closing the curtains down on their story. It can even bring an end to a Gudou-type Briah user's ability (ex. Ren's and Beatrice's), forcing them back to their normal form far sooner than they normally would have. Even defending against it is futile, as the fists nature to end things can render all weapons, armor, and magic futile. This all ending fist can even break through the powerful defenses of Valeria Trifa's Ahnenerbe. He is also even able to hit elemental beings with his Ahnenerbe, as he knocked out Tubal Cain while he had Beatrice's Briah, which makes him become pure lightning, returning him to his normal state. 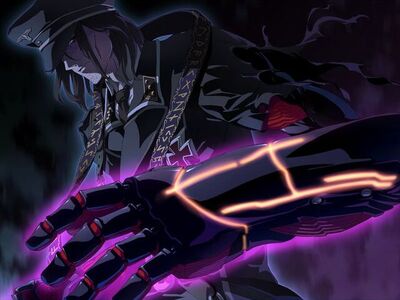 : Machina’s Gudou-type Briah, his desire being “I want to die with a single end”. A Craving born in dying only a single death, Machina's arms are turned into black metallic arms. Originally the hands that slowly bring an end to one's life and even their powers, Nigredo now has the power to instantly end all phenomena with a single punch. Living beings and creatures, buildings, elements of nature like fire and lightning, even those such as thoughts and concepts like the god of darkness and dependent of Mercurius' Law, Methuselah, will all erased from existence regardless if they have a shape or not. The fists of a man that care not of the World or of anything, but the end to their story, their history, and thus their existence. Such is the all annihilating fists of Machina that he can erase anyone and anything if they even so much as have the briefest of history, making them next very difficult to survive if one were to fall prey to it.

However, Midgardr Völsunga Saga is not without its flaws. The main one of which is that his Briah, as well as his Ahnenerbe, are all based solely on his fists. This means that Machina has to directly hit his target in order to erase them, meaning anyone who completely avoids contact with his fists will be safe from it.