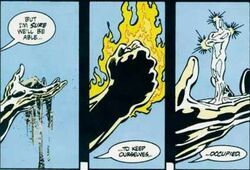 Matter Manipulation is the ability to manipulate the particles that make up the matter and bonds between them. Everything in universe is made up of molecules, which are made up of atoms, and an atom consists of sub atomic particles like protons, neutrons and electrons.

Hence, it depends on what level the ability works, which totally depends on the showings of the ability and character. Matter manipulation bypasses generally conventional durability, and is considered a broken ability depending upon the level of its usage

There are several levels to Matter Manipulation with each tier being more effective then the last.

The ability to control matter on the atomic level, Molecular Manipulation is when one is able to manipulate molecules and the bonds that connect them. The manipulation of ionic as well as covalent, anti covalent, polar covalent and hydrogen bonds all fall under this category.

Atomic Manipulation covers the ability to manipulate individual ions, atoms and isotopes. Characters of this level are able to alter the nature of atoms along with their properties at will and convert matter into whatever form their will dictates (transmutation) or outright tear the opponent apart on the atomic level.

The ability to alter the protons and neurons that make up atoms in whatever way they so desire. The ability to manipulate the electrons of an atom however are Macro Quantum, the next tier we shall be discussing.

The ability to manipulate electrons, quarks bosons and leptons along with comparable structures. This allows the noted character to alter such fundamental things to the cell such as the spin electrons undertake as well as the arrangement of said electrons.

The most extensive degree of Matter Manipulation, Quantum Manipulation is attained when the user is able to effect and alter quantum strings and foam, allowing that character to manipulate the fundamental space time packets that construct and make up our universe. Characters with this level have virtually no limit to what they can do whether it be the manipulation of time and space, energy fields, or Matter Manipulation that is unrivaled by most opponents.