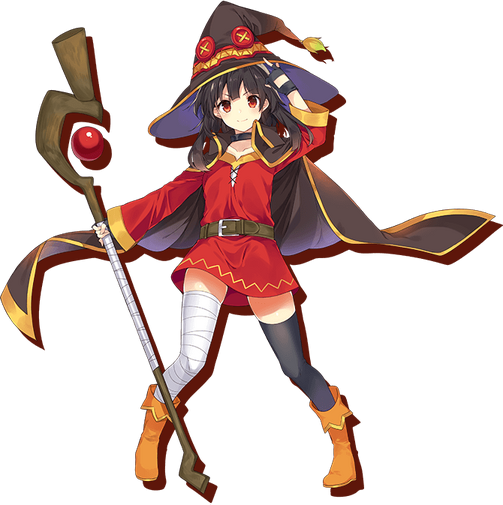 Megumin is an Arch Wizard of the Crimson Demon Clan in the Fantasy World, and is the first person to join Kazuma's party. She is one of the main characters of the KonoSuba series.

She decided to become an Explosion mage after a busty older woman saved her with Explosion magic when she was young, and after learning it, claims she "must cast Explosion once a day or die." After traveling to Axel Town, she quickly gained a reputation as a crazy Explosion fanatic, thus parties refused to accept her before she met Kazuma and Aqua.

Attack Potency: Athlete level (Stronger than Satou Kazuma even after using all of her mana), Multi-City Block level with Explosion (Her explosions can destroy parts of a city and make craters 20 meters in diameter. Her explosion is so powerful that she could kill Vanir with one, and it is also said that his explosion is capable of harming even the gods.) | Athlete level (Slightly stronger than before), Small City level with Explosion (She could create an explosion that yields around this level)

Stamina: High, She is capable of creating an explosion that would be impossible for a normal person and still alive

Intelligence: Genius; Megumin's stats are the highest in terms of intelligence and she is shown regularly to be clever when the situation demands it. However, said intellect is commonly hindered by her chuunibyou tendencies, best shown by her refusal to learn any spells outside of Explosion despite the obvious limitations that come with it.

Weaknesses: She can only use Explosion once a day and she runs out of mana, she cannot fight in closed spaces because she could not use explosion since the explosions will cause the place to cave in.

The spell itself is shown to be incredibly devastating, often obliterating anything within its targeted range and even sending out powerful shock-waves that can be felt hundreds of yards away. However, the severe mana drain, combined with Megumin never using points to increase her mana, results in her always collapsing after casting and becoming completely immobile As of Volume 9, she can cast it without chanting.