All Fiction Battles Wiki
Register
Don't have an account?
Sign In
Advertisement
in: Characters, Immortals, Genderless Characters,
and 67 more 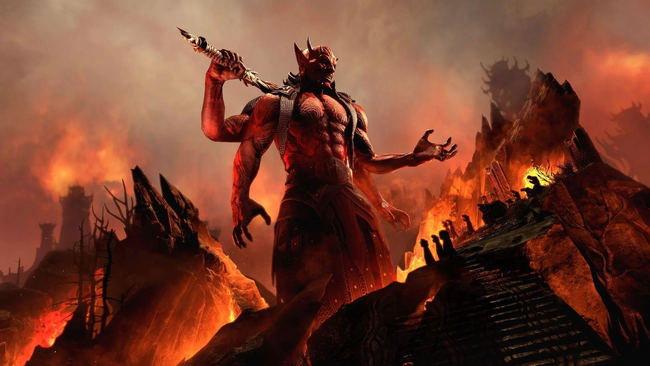 Mehrunes Dagon is the Daedric Prince of Darkness and Destruction, whose sphere encompasses destruction, change, revolution, energy, and ambition. Dagon is associated with natural dangers like fires or earthquakes. Flash floods, thunderstorms, and other natural disasters have been linked to communions between him and his cultists. The Prince is also said to be the author of the Mysterium Xarxes. Mehrunes Dagon has an insatiable hunger for destruction.

While they are not his biological spawn, Dagon considers Xivilai Moath and Faydra Shardai his adopted children. There is a belief that Mehrunes Dagon is allied with Hircine, but this may be an oversimplification by mortals. Because the two share many parallel interests, they are inclined to occasionally act together. Enemies of the Prince of Destruction include Ebonarm and Molag Bal, with whom Dagon shares a bitter rivalry—the two have been known to meddle in each other's schemes when the opportunity arises. It is also rumored that the Prince hates Nocturnal. Dagon's protonymic is Lehkelogah and his neonymic is Djehkeleho-dehbe-effehezepeh. The Prince's summoning day coincides with the Warriors Festival, the 20th of Sun's Dusk

According to the Commentaries, the Magna Ge secretly created Mehrunes Dagon in "the very bowels of Lyg". Lyg, it is claimed, is an "Adjacent Place", a sort of parallel version of Tamriel, and the domain of a deity known as "the Upstart who vanishes". Lyg, the "Mundex Terrene", was once ruled by dreugh-kings from the "nineteen and nine and nine" seas, who waged endless wars against each other's "slave oceans"

Dagon was created to be a prince of good, and was imbued him with Oblivion's most precious asset, hope. The Prince began a revolution, "threw down Lyg", and "cracked his face". He let the lowly slaves know free will, and stirred them to violence against their masters. His "red legion" overthrew the tyrant dreughs, toppled the towers of CHIM-EL GHARJYG, destroyed great cities, and slaughtered the templars of the Upstart. Hope spread like a "brush-fire" as the world was set Free

Regardless of the veracity of this account, the tome played a role in the assassination of Uriel Septim VII and his heirs, starting the Oblivion Crisis

Attack Potency: High Hyperverse Level (Mehrunes Dagon is a Daedric Prince which maintains and comprises Oblivion, and is one of the Ruling Princes and holds a great piece of oblivion in which he holds absolute control of and is capable of fighting the Tribunal at their prime for some time before being defeated)

Speed: Immeasurable (Can travel the infinite realm of Oblivion) | Omnipresent (Inside his domains)

Feats: Was able to keep up with the tribunal for a while before being defeated