All Fiction Battles Wiki
Register
Don't have an account?
Sign In
Advertisement
in: Characters, The Elder Scrolls, Book Characters,
and 77 more 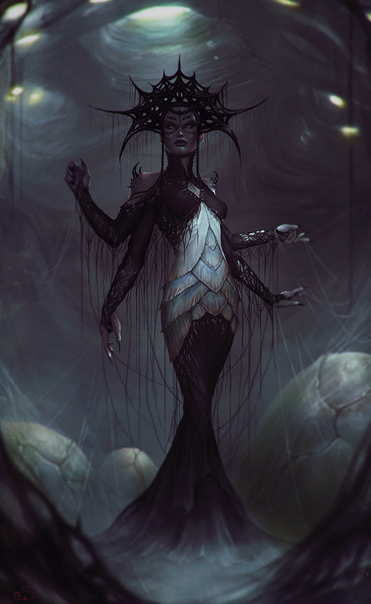 Mephala is a Daedric Prince whose sphere is obscured to mortals. She is associated with murder, lies, deception, sex and secrets, and is always weaving a web of intrigue and terror. Mephala is also known as the Webspinner, Androgyne, the Spinner, the Spider, the Teacher of the Secret Arts, the Queen of the Eight Shadows of Murder, The Silver Spider, the Spider God, the Dark One, the Whispering Lady, the Lady of Whispers, and the Queen of Oblivion. She is also referred to as the princess of secrets and she who weaves the sordid web of human affairs. Long, thin silver hair is a trait associated with Mephala's champions.

Mephala interferes in the affairs of mortals for her own amusement, and does nothing without purpose. Mephala thinks of the affairs of mortals as a weave; pull but one thread and the whole thing unravels. To her, the "web" of the Aurbis is an interconnected system of action and consequence, and she spins new threads to influence outcomes. In an essay analyzing the Daedric Prince, Divayth Fyr posits that Mephala likely doesn't see mortals as mere playthings, unlike some of her fellow Princes

The Webspinner deals in secrets and hidden lore. She and her worshippers value secrets and mysteries above all else. Those who stumble upon one of Mephala's shrines or a place where an artifact of hers is hidden may find Mephala whispering forbidden secrets in their ears. Hermaeus Mora, the "Demon of Knowledge", is sometimes referred to as Mephala's sibling. Hermaeus Mora collects knowledge of all sorts, but Mephala cares only about knowledge that is obscure and undisclosed. Not only is she secretive, Mephala also cares very little for the safety and well-being of mortals. The Spider takes great pleasure in strife. A ruined marriage, two peaceful factions erupting into bloody warfare over falsified evidence of treachery ... she finds all of these amusing

Attack Potency: High Hyperverse level (Mephala is a Daedric Prince which maintains and comprises Oblivion, and is one of the Ruling Princes and holds a great piece of oblivion in which she holds absolute control of, she is also one of the creators of Oblivion) | Ascendent level (In her Original State Before creating, she was an Et'Ada who were Boundless, Eternal and Infinite Spirits who existed wholly independently of duality, predating the concepts of Time and Space, and living in pure harmony, having practically no personalities or boundaries that separated themselves from anything else, inhabiting creation in its original Zero-State of pure Infinite possibility, where everything that can and cannot happen is always happening all at once, forever, regardless of contradictions, is stated to be one of the strongest Et'Ada)