All Fiction Battles Wiki
Register
Don't have an account?
Sign In
Advertisement
in: Characters, Sonic the Hedgehog, Villains,
and 35 more 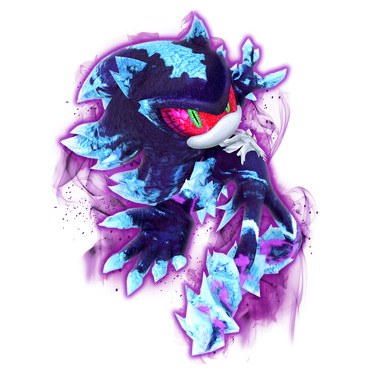 Mephiles the Dark is one of the main primary antagonists in Sonic the Hedgehog (2006).

He is the malicious mind and conscience of the Sun God Solaris, which was born after experiments with the aforementioned Sun God which divided him into two halves, Mephiles and Iblis. Mephiles later was sealed within the Specter of Darkness by Shadow the Hedgehog, but freed during a skirmish between Shadow, Rouge and Eggman.

After being freed, Mephiles planned to free his half, Iblis, from Princess Elise's hands and rejoin with it, remaking the ancient God Solaris.

Gender: Genderless, but treated as a male

Classification: Half of Solaris, Mind and Conscience of Solaris

Powers and Abilities: Superhuman Physical Characteristics, Shapeshifting (Can appear as a Shadow clone but can also transform into his true form), Duplication (Created tens of clones of himself to fight Shadow), Transformation, Energy Manipulation, Energy Projection, Darkness Manipulation, Genius Intelligence, Crystallization, BFR (Is capable of sending others across multiple timelines), Time Travel, Regeneration (Mid-High: Regenerated after being turned into gas), Self-Sustenance (Types 1 and 2), Time Manipulation, Immortality (Types 1 and 3), Dimensional Travel, Flight, Portal Creation (Can create holes in time), Homing Attack, Forcefield Creation, Limited Reality Warping, Fusionism, Immersion and Power Mimicry (Can sink into one's shadow and then copy their traits), Summoning (Can summon enemies so that they can assist him), Resistance to Sealing (The effects of the Scepter of Darkness are now resisted by him), Extreme Cold and Cosmic Radiations

Attack Potency: Dwarf Star level (Fought against Shadow alongside his partners and could defeat the former with one attack. Caught Sonic off-guard and could pierce him with a fatal beam)

Speed: FTL+ (Kept up with Shadow and attacked Sonic before he could react)

Range: Standard Melee Range, Hundreds of meters with his attacks and projectiles

Intelligence: Genius (Was able to manipulate the entire cast of Sonic in a gambit to restore himself to Solaris)

Weaknesses: As a being of darkness, Mephiles is vulnerable to light-based attacks, which renders him immobile