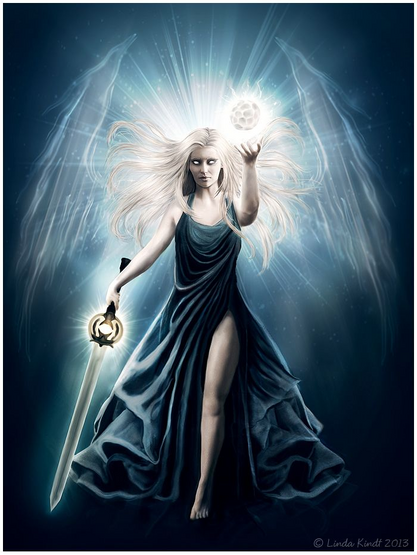 Meridia, Lady of Infinite Energies, the Bright Lady, the Strict but Fair Arbiter of Inner Luminance, the Sunfire, the Radiant One, the Keeper, the Lady of Light and the Prince of Life is the Daedric Prince "of Life and Light", associated with the energies of living things. The Sunburst is her symbol. She has a great and everlasting hatred for the undead and will greatly reward any who eliminate them from the world. As such, Meridia has a reputation for benevolence, and is one of the few Daedric Pinces who is usually not considered to be wholly evil. Her day of summoning is the 13th of Morningstar

In spite of this, she is referred to as the Glister Witch or the Lady of Greed by those who view her less favorably, with a habit of collecting live human specimens to satiate said greed. To her enemies, Meridia is known for her violent loathing of disorder, irrational anger towards entities she deems impure, and hatred of mortal free will and defiance. As with most Princes, Meridia sees mortals as "assets" primarily for use as a means to an end. Meridia can bestow upon mortals immortality, at the cost of their will, becoming those known as the Purified; slaves to her command, cleansed of disease, death, and free will. People who join the ranks of the Purified are both those that willingly pledge to serve Meridia and the unwilling, such as those that defy her. Meridia also granted immortality to her champion, Umaril the Unfeathered, the ancient Ayleid enemy of Pelinal Whitestrake. Her Aurorans and Umaril returned during the time of the Oblivion Crisis to seek vengeance on the Divines

Name: Meridia, Lady Of infinite energies, Prince of Life, Lady of Light, the Keeper, the Radiant One, the Sunfire, the Bright Lady, the Strict but Fair Arbiter of Inner Luminance

Attack Potency: High Hyperverse level (Meridia is a Daedric Prince which maintains and comprises Oblivion, and is one of the Ruling Princes and holds a great piece of oblivion in which she holds absolute control of, She was originally a Magna-Ge who ran after the plot of Lorkhan was discovered) | Ascendent level (In her Original State Before creating, she was an Et'Ada who were Boundless, Eternal and Infinite Spirits who existed wholly independently of duality, predating the concepts of Time and Space, and living in pure harmony, having practically no personalities or boundaries that separated themselves from anything else, inhabiting creation in its original Zero-State of pure Infinite possibility, where everything that can and cannot happen is always happening all at once, forever, regardless of contradictions)

Feats: Has Said that even a fragment of her true power is enough to destroy the plain of mundus multiple times over