All Fiction Battles Wiki
Register
Don't have an account?
Sign In
Advertisement
in: Characters, Anime Characters, Manga Characters,
and 69 more 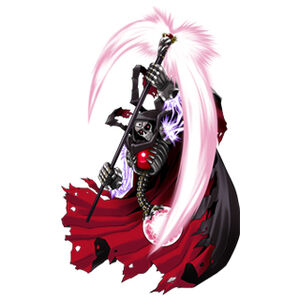 MetalPhantomon is a Cyborg Ultimate level Digimon evolved from Phantomon, it has the appeareance of a Grim Reaper and it operates via a energy supply from a Alternative Dimension of the Digital World. 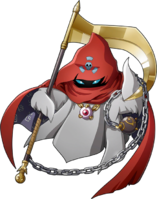 Digivolved from Bakemon, it is a reaper-like Digimon that uses a gigantic Scythe as it's weapon and a chain. similar to Mammothmon, it has a collar around it's neck that gives Phantomon the ability of Clairvoyance. 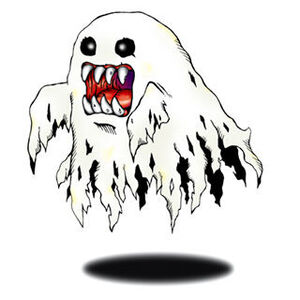 a Ghost-like Digimon that is covered by a cloth on it's head. everything around this cloth is a mystery and it's said that it's true form has become a Black Hole.

All previous abilities amplified plus Telekinesis (as seen here)

All previous abilities plus Higher-Dimensional Existence (All Digimons are primordial souls that exist on a higher dimension transcending reality on various levels of space-time), Non-Corporeal (the composition of a digimon is a metaphysical substance and it's existence is equivalent to primordial souls being untouchable to those who live in a lower scale world), Non-Physical Interaction, Hacking (Digimons in fact are considered the best hacking tools in the world), Law Manipulation, Reality Warping, Pocket Reality Manipulation (Reality is viewed, by Digimon, as a normal computer program. and thus, they are able to warp the structure of the very reality by changing the laws in whatever form they want to be), Mind Manipulation and Soul Manipulation (All Digimons are able to interact with each other's Minds and Souls and even rewrite their structure), Regeneration (the wireframe of a digimon is covered with a texture that is the first form of defense and Digimons are capable of regenerate them after they are damaged [this is non combat applicable]), Immortality (Types 1, 3 and 4 [the last one is non combat applicable]), Absorption (Digimons are capable of absorbing data of the envinroment around as well as other beings), Power Mimicry (After absorbing Data, Digimons can assimilate the powers for themselves. they are even capable of learning the opponent's abilities by observing them, depeding on the digimon's intelligence), Reactive Evolution, Existence Erasure (Digimons have the power of "delete", which erases the being and sends their data to the Dark Area), Inorganic Physiology (Type 1; Digimon are data beings and are not organic), Self-Sustenance (Type 1; Digimon do not need to breath to live), the Ability to affect Nonexistent beings (Holy Power users Digimons are able to interact with Darkness which is non-existent in-verse), Purification and Empathic Manipulation (Holy Power is capable of purifying the darkness inside the Earth and bring positive feelings), Healing, Resurrection, Light and Holy Manipulation, Empowerment, Reactive Evolution, Existence Erasure and Death Manipulation (Dark Power have the ability to both kill and erase any target it touches), Absorption, Corruption (Type 2; if touched, the Darkness will corrupt any existence into a new dark existence)

Mind and Soul Manipulation (Digimon's mind and souls are protected by a Wireframe which in turns protect their Digicores), Power Nullification, Absorption and Hacking (Digimon are unnafected by the hacking of the Eaters which absorbs their data and power and leaves them pretty much useless), Biological Manipulation, Existence Erasure (Digimon containing the X-Antibody are able to resist Yggdrasil's erasure technique), Time Manipulation

Attack Potency: Mountain level+ (Should be comparable to Meramon) | Multi-Solar System level (Should be far above the likes of Digitamamon and be comparable to MegaKabuterimon who destroyed the entirety of Vadermon's realm) | Multi-Solar System level (Far stronger than Phantomon) | High Macroverse level (All Digimon have true forms that resides in the Digital World, which is in a higher layer than the Dimensional Wall between the former and the Human World, making them 11 dimensional beings)

Intelligence: Varies among a individual

Weaknesses: Holy and light based skills