All Fiction Battles Wiki
Register
Don't have an account?
Sign In
Advertisement
in: Characters, Sonic the Hedgehog, Video-Game Characters,
and 57 more 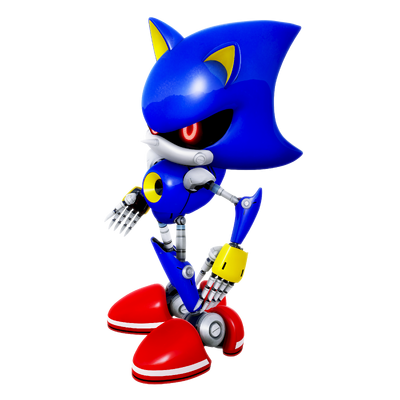 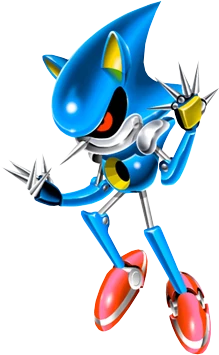 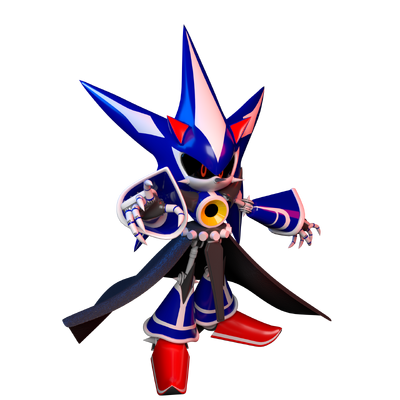 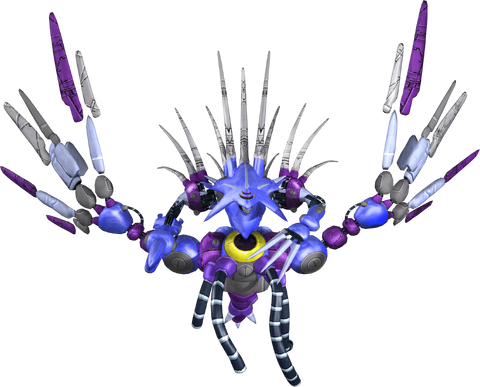 Metal Sonic is one of the main antagonists of the Sonic the Hedgehog Franchise. being a metallic and robotic version of his Original counterpart created by Dr. Eggman] for the purpouse of defeating Sonic to help the Doctor's plans. he was first used in Eggman's conquering of Little Planet, Kidnapping Amy Rose and fighting against Sonic and ultimately losing to him. later, both would have battles multiple times.

he was also the main antagonist and true final boss of Sonic Heroes betraying his creator and planning to conquer the entire world on his own and transformed into Metal Overlord. However, he was then defeated by Sonic and his friends

Gender: Genderless, but treated as a Male

Superhuman Physical Characteristics, Combat Skills, Flight, Spaceflight, Inorganic Physiology (Type 2), Self-Sustenance (Types 1, 2, and 3), Most of Sonic's basic abilities (Homing Attack and Limited Instinctive Reaction, etc.), Can generate electricity, shields and fire a powerful beam from it's chest cavity, Can fire plasma beams, Enhanced Energy Manipulation and Statistics Amplification (With the Lost Labyrinth treasure, Metal Sonic can harness and manipulate different energies while greatly increasing its physical attributes), Resistance to Extreme Cold, Cosmic Radiations, Time Manipulation/Time Stop and Age Manipulation (Can traverse the Special Stages of the Time Stones by using the Metal Sonic Projector all over Little Planet, The mysterious Time Stones are said to be able to turn a desert into a jungle, and a polluted lake into a beautiful lake by crossing through time, which also affects biological life inside of it, and can remove/alter time from their stages) and Existence Erasure (Like Classic Sonic and his Modern counterpart, Metal was seen largely unaffected by Time Eater's erasure of the world)

Same as before, Acrobatics, Vehicular Mastery, Defensive Aura (While using his boost technique, Metal Sonic creates an aura that coats him and allows him to barrel into enemies and obstacles with no repercussions), Power Mimicry (With Copycat), Space-Time Manipulation, Time Travel, and Dimensional Travel (With Chaos Control), Paralysis Inducement (With Chaos Spear), Forcefield Creation (Also of the fire and electricity varieties), Statistics Amplification (Can enhance his movement speed with Speed Shoes), Invulnerability (With the Invincibility Monitor and by himself with Sonic Boom, which he was capable of copying from Sonic), Limited Telepathy via ESP, Invisibility and Intangibility via Chroma Camo, Shock Wave Generation, Explosion Inducement

Attack Potency: Large Planet level (According to official guidebooks, Metal Sonic was made to be equal and match Sonic in every regard. Was upgraded in Sonic Mania so that he could fight Sonic again even more powerful than before) | Large Planet level (Should be comparable to Adventure Sonic), higher with Light Speed Attack (the Light Speed Attack allows it's user's attacks to be doubled in power) | Large Planet level (Copied the data of Chaos and the others to become massively more powerful than his base) | Dwarf Star level (Is still capable of fighting evenly with Sonic who had defeated Ultimate Emerl), higher with Light Speed Attack | Universe level+ (After absorbing the data of Chaos, Eggman feared his extreme power and had doubts that anything he could do could actually defeat him, making him far superior to the likes of Perfect Chaos, Mecha Sonic and the Biolizard. Eggman also said that using the 7 Chaos Emeralds could actually defeat him, but still had doubts. After achieving his full state of power, he has became so massively stronger, that a mere singular Super Form is not enough to beat him that it needed the combined efforts of Team Super Sonic to take him down)

Intelligence: Whatever data it's programmed within base. Gained full sentience and independence as Neo Metal Sonic, after which it overthrew and kidnapped Eggman and set off the entire plot of Sonic Heroes by manipulating 12 characters into chasing and fighting a false Eggman while copying their abilities and data to gain the power to conquer the world and defeat Sonic once and for all

What I'm Made Of - Sonic Heroes -OST-
Metal Overlord's theme