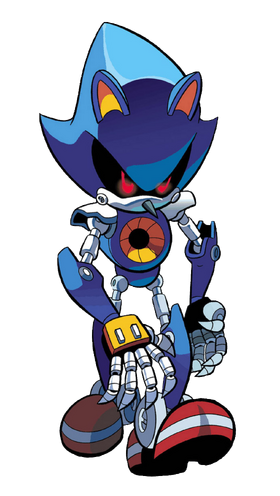 Metal Sonic is a character who appears in the Sonic the Hedgehog comic series and its spin-offs published by Archie Comics. It is a robotic doppelganger of Sonic the Hedgehog and the most famous creation of Dr. Eggman, having been created to match and surpass Sonic's abilities. It has been a formidable foe to the Freedom Fighters since its inception and has at various points even betrayed Eggman to pursue its own obsessive goals.

It finally had given triumph over Robotnik Prime's Metal Sonic when Dr. Eggman realized the Free-Thinking algorithm provided the experience and decision making needed to give it an edge it was lacking for too long.

Gender: None, but referred as a male

Same as before but on a vastly higher scale than before, Large Size (Type 1), Acausality (Type 1)

Attack Potency: Universe level+ (Is consistently shown to be a constant rival of Sonic, fighting against him numerous times and even overpowering the same in different occasions alongside Scourge) | Universe level+ (Has absorved the data of Chaos alongside multiple heroes to make himself massively more powerful than his base forms) | Low Macroverse level (Far stronger than his previous forms, and is capable of fighting against Super Sonic alongside Knuckles and Tails powered up by all the Chaos Emeralds)

Speed: Massively FTL+ (Normally kept up with Sonic and the Freedom Fighters) | Massively FTL+ | Immeasurable (Can keep his own pace against Super Sonic)

Intelligence: Varies. The 3.0 to 3.6 versions of Metal Sonic were described as cold, merciless and mindless drones, which remained silent during the course of battle. The fifth, sixth, and seventh versions were voiceless, and the third model only served as a radio mouthpiece for Eggman. A a voice codex was installed for Metal Sonic v3.7 and onwards along with a more developed personality, a Free will algorithm CPU and a single-minded desire to destroy Sonic.

Weaknesses: Since they were built in order to counter Sonic, the Metal Sonic models are not always designed to take on opponents other than Sonic (This weakness was less present in the latest versions, which remained vulnerable after finishing the V. Maximum Overdrive Attack) | None notable