All Fiction Battles Wiki
Register
Don't have an account?
Sign In
Advertisement
in: Tier 2, Tier 2-B, Characters,
and 38 more

Milk Cookie is an Epic-class cookie and the main protagonist in Cookie Run: OvenBreak's Guild Run storyline. He is also playble in Cookie Run: Kingdom. When Milk Cookie was a child, a ferocious pack of Cream Wolves lurked near the Milk Village to charge towards their quarry of the freshest milk in the land. Milk Cookie was inconveniently unaware of this threat, and was right in front of the well when the Cream Wolves started their raid. From behind the mountain's mist, a young Dark Choco Cookie appeared and drove off the Cream Wolves, saving the village. Milk Cookie then made a promise to become a hero as great as he was that day, as the two agree to meet each other in the future, both as fellow heroes. The Milk Tribe, along with Milk Cookie, swore allegiance to and soon became a part of the Dark Cacao Kingdom after they were saved.

"Everything the light touches, let there be peace! Milk Cookie made a divine oath to protect the world from all evil. When raising up the Healing Milk Mace, a splendid glow soars to the skies and bathes the world in light. The forces of evil flee in terror at the sight of the Divine Milk Shield. Milk Cookie has faced many foes and yet his resolve remains unsullied by corruption and despair. Even on the brink of exhaustion, this selfless and noble protector will cast a blessing of protection for other Cookies first."

Superhuman Physical Characteristics, Weapon Mastery, Flight, Acrobatics, Energy Manipulation and Plasma Manipulation (via Plasma Crystal Ball), Explosion Manipulation (via Melon Dynamite), Fate Manipulation (Via the Divine Guardian Shield (and presumably his shield), which guarantees victory to the wielder if their heart is pure), passive Morality Manipulation (via Darkwind Quiver, it feeds on the morale of everything nearby), Reality Warping (His Pet, Milk Angel, dreams of wishes that can be made physical), Dream Manipulation (via Haunted Snuggly Bear, which can eat nightmares), Data Manipulation and Transmutation (Coin Magic turns enemies and obstacles into coins. New PepBook can passively transform obstacles and Jellies into computer data), Blessed (Is blessed by The Divine Light alongside Madeleine Cookie and Angel Cookie), Homing Attack (via Carrot Missile), Non-Physical Interaction (Blocks fallen spirits with his shield, purifying them), Forcefield Creation (Via Bubble Gum Spring Jumpers, Shield Bubble Gun and Noble Sacrifice), Healing (via Bookseller's Monocle and his Healing Milk Mace), Resurrection (via Red Egg of Resurrection and Sugar Swan's Shining Feather), Invulnerability (Via Jelly Worm's Sticky Goo), Curse Manipulation (via Priestess Cookie's Paper Charm), Statistics Amplification (Can increase the power of his allies with a Light Magic barrier), Statistics Reduction (via Pilgrim's Slingshot), Resistance to Bone Manipulation (Gingerbrave stated that Cookies don't have bones), Extreme Heat (Can effortlessly hold Purple Yam Cookie above lava. Purple Yam Cookie is stated to be made in extreme temperatures, and one of his mere Soulstones can cause burns), Extreme Cold and Cosmic Radiation (Can exist in space without any problems) and Disease Manipulation (Scaling from Tiger Lily Cookie, who can harm Jellywalkers with physical attacks. Cookies are mutated into Jellywalkers on contact with them, becoming a "jelly-eyed mindless monster" in the process)

Attack Potency: At least Multiverse level (Should scale to Purple Yam Cookie, who fought but lost to Dark Choco Cookie in his Young Prince key and disarmed Gingerbrave. Fought Pitaya Dragon Cookie while it was in a weakened state alongside Purple Yam Cookie, Dino-Sour Cookie and Mala Sauce Cookie, the former of which required Fire Spirit Cookie to resort to trickery to defeat, as well as fighting Hollyberry Cookie on equal grounds)

Stamina: Very high (Should scale to the rest of the Cookies)

Standard Equipment: Milk Cookie always has his Healing Milk Mace and his Divine Milk Shield on hand, the latter of which should have the same properties as the Divine Guardian Shield as they both function near-identically. He also has his Pet, Milk Angel, who will periodically grant its own wishes, as well as having several different Treasures and Invocation Cards on hand

Intelligence: Above average (Practiced healing magic, which is one of the more difficult magic types to learn in the Cookie Run verse. Is an expert in wielding his Healing Milk Mace and his Divine Milk Shield to great efficiency)

The duo take shelter for the night

A night at the tavern

A series of events

The team is seperated by a fissure 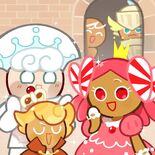