Misora ​​Haebaru is the main protagonist of Hagure Idol: Jigoku-hen. After the mysterious murder of her father, a famous karate master, she move to Tokyo to become a singer and find money for her family. Although initially forced to work as Gravue idol through deception and forced to defend her virginity from various perverts, she eventually realizes that she is satisfied with her job and remains in this business.

Powers and Abilities: Superhuman Physical Characteristics, Martial Arts (Type 4. She’s been trained in karate by her father since she was 2 years old and is considered a master in it, she could beat a MMA fighter, a Champion of 3 unified Muay Thai associations, a Brazilian Jiu-Jitsu prodigy who was trained by an 30/0 undefeated master in Brazilian Jiu-Jitsu), Pressure Points and Durability Negation (Her father taught her about thrusting her punches to create weak spots on an opponent which will result in a sure kill techno regardless of the location or guard of the opponent, she can hit a pressure point to make someone have the sudden urge to sweat and urinate, she can hit pressure points to paralyze someone), Fear Manipulation (She was able to get Mr. A a competitor to leave the competition due to him seeing her “Danger Zone” which made him feel he’d die if crossed, she made a assassin backpedal after she showed the will to fight him), Acrobatics, Supernatural Willpower and Pain Tolerance (Type 1. She can fully exhale after having the wind knocked out of her and being incapable of moving or catching her breathe, she can forget the pain of this process to fully make it happen, she could take multiple cuts from a katana, she could get tasered 10 times within 2 and a half hours and could break her pinky back into place), Paralysis Inducement (She can hit pressure point behind the ears that’ll make their semicircular canals and autonomic nerves paralyzed and they’ll be unable to move), Precognition (Type 1. She has been able to analyze people’s stances and use her knowledge on their martial arts to pre-predict their next moves).

Attack Potency: At least Wall level (She could break a person’s nose, could punch through concrete blocks, break concrete slabs with her head, shattered a watermelon and table with her breasts, she could shatter part of a wall with one punch, she could one shot a highly trained assassin)

Speed: Peak Human (She could run from Mount Fuji to Gotemba in 30 minutes), Subsonic reaction and combat speed (She could react and counter attacks against Chae Yoon Hee who can move faster than the eye can see)

Lifting Strength: At least Average Human, likely Above Average Human (She could lift a 50kg MMA Fighter up with one arm while be choked out and about to pass out)

Durability: At least Wall level (She can take strikes from people who can block and counter her own strength or even surpass hers)

Stamina: High (She was able to fight 55 people nonstop and beat them all with one hit and she could run 25km and not be noticeably fatigued)

Weaknesses: Honor (She won't extremely harm anyone unless they give her no choice)

Ibuki: She can use this to regain her breath if the wind has been knocked out of her by exhaling and fixing her breathing. 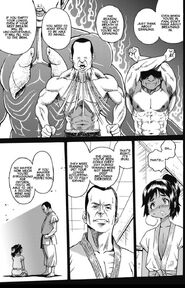