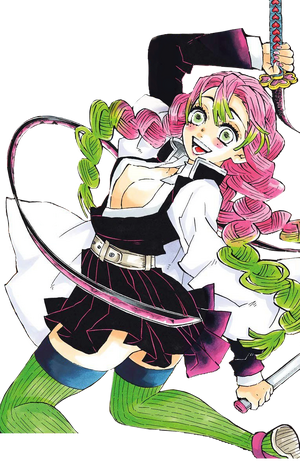 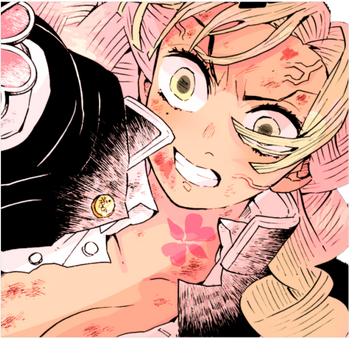 Powers and Abilities: Superhuman Physical Characteristics, Regeneration (Low; By controling their breathing they can slow the bleeding of a blood hemorrhage), Acrobatics (She's capable of performing many maneuvers in dense forests and is the most flexible Pillar with the highest level of maneuverability), Weapon Mastery (Type 1. She is extremely skilled with her sword being able to rise of the rank of Hashira), Body Control, Statistics Amplification (Breaths increase the strength and speed of humans to match Demons, and she has obtained the Demon Slayer Mark which makes her drastically stronger, faster and swifter), Regeneration Negation (Up to High-Mid; her Nichirin sword can stop the regeneration of demons), Pain Tolerance (Type 1. She could continue fighting with large cuts across her chest), Elasticity (Her sword is capable of stretching and bending in was to make it longer), Instinctive Reactions (She was dodging Muzan's attacks without being able to see them), Transformation (Via Demon Slayer Mark), Resistance to Fire Manipulation, Water Manipulation, Heat Manipulation (Demon Slayer Corps Garbs protect against fire, water and cold), Fear Manipulation and Paralysis Inducement (She should be able to resist the aura of Lower and Upper Moons like Giyu and Tanjiro)

Attack Potency: Large Building level (She could keep up with Zou Hakuten and was capable of parrying many attacks from him), City Block level+ with Demon Slayer Mark (Stronger than before, could keep up with Nakime, she was able to keep up and fight with Muzan for a limited time also was able to rip off one of tendrils)

Speed: Massively Hypersonic+ (Could keep up with Zou Hakuten and could react to Muzan's attacks at the start of the fight)

Lifting Strength: Class 25 (Should be superior to Tanjiro), possibly Class 100 (She should be comparable to Gyomei)

Stamina: High (She is capable of fighting Zou Hakuten and even take an attack head on to the point where she tensed all of her muscle to survive and was able to continue fighting, she could fight with Nakime and then Muzan for a longer time than most)

Intelligence: Gifted (Flame Breathing was taught to Mitsuri by Kyojuro. However, although Mitsuri had learned it, she was not as skillful with it and cannot fight to her fullest using it, leading her to solely develop the Love Breathing and was able to understand Nakime ability after seeing it a few times)

Love Breathing: A Breathing Style originally branched out from the Flame Breathing. The forms and techniques that are used in this Breathing Style is a combination of whip-like attacks and therefore can only be successfully performed by Mitsuri due the unique constitution of her body that renders her incredibly flexible and agile, but still possessing inhuman strength due to her muscles being eight times denser than a normal human's, allowing her to deliver fast and powerful blows and move unhindered due to her body not being physically bulky.