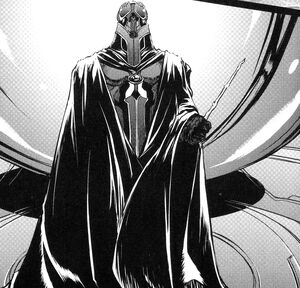 Morlock is an antagonist of Ichiban Ushiro no Daimaou. He's a member of CIMO 8 who was sent by The One to stalemate Akuto Sai while The One was carrying his plan to use the Formless Power.

Powers and Abilities: Superhuman Physical Characteristics, Magic, Size Manipulation (Can send part of his mass to another dimension to shrink to the size of an insect), Animal Manipulation (Can control insects), Flight

Speed: At least Supersonic, likely higher (Can move too fast for Act 11 Akuto)

Intelligence: Morlock is an overconfident man who tends to underestimate his opponents.

Standard Equipment: An army of ants