All Fiction Battles Wiki
Register
Don't have an account?
Sign In
Advertisement
in: Characters, Female Characters, Undertale,
and 24 more

Muffet is the leader of the spider clan of the underground, she is a very persuasive and even somewhat creepy person. She and her spider clan run an entire bakesale of spiders in order to raise funds to free the ones trapped into the RUINS since they can't leave it, and even if they could they can't survive Snowdin's cold. They sell multiple types of pastries and sweets there, however unlike the RUINS spiders she sells them at the extreme prices of 9999G, which causes her to have barely any customers. She receives an anonymous tip from someone (likely Mettaton) offering a large sum of money if she collects the human's SOUL, which causes her to engage Frisk in combat if they don't buy her pastries, however she will let Frisk go after receiving a telegram from the spiders of the RUINS telling that the human didn't hurt a single spider and even bought her pastries. In the True Pacifist ending she finally gets enough money to get her spiders out of the RUINS and thanks the human's efforts.

Superhuman Physical Characteristics, Social Influencing (Convinced a guy to buy her overpriced donuts even when he didn't want to), Can understand her spiders, Can make webs that are capable of trapping people, Surface Scaling (Scaling from her spiders, who can crawl on walls), Thread Manipulation on the SOUL (Via Purple Mode), Animal Manipulation (Uses spiders as a attack), Creation (Can create several donuts and croissants to use in battle), Statistics Reduction (Opponents in purple mode have their speed reduced to their base and cannot increase it while in it), Summoning (Can summon her pet), limited Technology Manipulation (Blocks Frisk's phone signal using cobwebs), Resistance to Extreme Heat (Is able to go through Hotland, which is stated to be extremely hot by several characters and where water can vaporize in a instant, without any problems), and possibly Fear Manipulation (Wasn't afraid of Chara, even though they scared Doggo with their presence even though he couldn't even see them or know if there was even someone there and scared Flowey even though the flower believed he couldn't feel anything).

Same as before. All monsters are made of Magic, Non-Physical Interaction (Magic is capable of harming ghosts which are incorporeal), Soul Absorption (Monsters can absorb the SOULS of humans, granting them more power), Dimensional Storage (Every citizen of the Underground should have access to the dimensional boxes, even via their phones), Danmaku, Healing (Monsters should be able to heal themselves during a battle by eating monster food), Soul Manipulation (Monsters can directly attack someone's SOUL), Resistance to Soul Manipulation (All monster bodies are directly attuned to their souls, therefore any damage done to their body affects the soul) and Radiation Manipulation (Monsters drink radioactive waste as energy drinks)

Attack Potency: Small Building level+ (Is stronger than Mettaton, was hired by him to kill Frisk, who tanked this and could harm them with her attacks).

Speed: FTL (Can tag Frisk with her attacks and react to them. Should be faster than Napstablook, who was able to close their blinds before the light reached them).

Stamina: Very High (Can fight against Frisk for 17 turns without even getting tired, and would have been enthusiastic to go even longer if she hadn’t received a telegram from her spiders).

Range: Standard melee range, at least tens of meters with her magic.

Intelligence: Above Average (Is the leader of all the spiders in the entire underground, can make multiple types of pastries and even lead a entire bakery, runs a entire business by herself and is somehow able to sell overpriced sweets to people that don't even like her products, and Mettaton saw her fit to kill Frisk).

Standard Tactics: Muffet will start off by trapping her opponents in her web, and then trapping their SOUL in her spectral web with purple mode, afterwards she will attack using a combination of spiders and pastries, with more complex patterns the longer she fights, eventually she will also summon her pet to attack her opponent together with her other attacks.

Weaknesses: Muffet can be bribed by large amounts of money to lower the strength of her attacks, and will no longer fight an opponent if she sees they aren't a threat to her spiders or hasn't harmed them, her spiders can use signs to indicate what type of attacks she will use next. All monsters are weak to extreme killing intent from a powerful soul (like Chara), making them weaker than normal, and a monster defense will weaken if they don't want to fight.

Note: Shout-out to Vs Battles and the Undertale wikia for the Notable Attacks section.

Muffet in her web 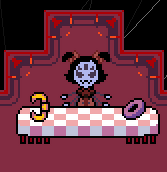