All Fiction Battles Wiki
Register
Don't have an account?
Sign In
Advertisement
in: Characters, Female, Female Characters,
and 31 more 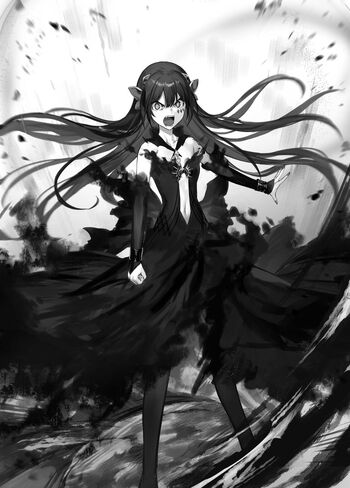 Aikawa Tooru got hit by truck-kun when trying to save a little girl in a typical isekai protagonist manner and ended up reincarnating as one of his "Real Life Online" characters, but instead of being the main or secondary characters it ended up being the old role-play character that Tooru had created in high school then the chuunibyou was at its highest point.

Tooru's soul and mind appeared to have fused with the original Nacht's and in turn totally became the new Nacht. Despite having inherited mannerisms and instinctual things such as flying Nacht still knew nothing of the world. Upon meeting one of the great God Dragons, and after having acquired an elf companion by saving her from your average goons, she was questioned as to her objective and that is when she decided to aimlessly wonder the world in order to explore it and live this new life to its absolute fullest, unlike her previous life as a collage student working a part-time job only to whale on an addictive online game.

Powers and Abilities: Superhuman Physical Characteristics, Enhanced Senses (Her draconic senses can cover tens of kilometers with extreme precision), Longevity (The Dragon race can live around since the beginning of civilization), Status Effect Inducement (Looking at her can induce charm), Darkness Manipulation, Aura (Has a pitch black abyss of an aura), Time Manipulation (Can accelerate time to move faster), Shockwave Absorption, Transformation, Healing, Dimensional Storage, Self-Sustenance (Type 2), Magic, Fire Manipulation (Can cast hellfire), Flight, Extrasensory Perception (Can perceive souls and see the nature of them; Can sense mana), Information Analysis (By looking unto someone’s soul she can see their past actions and thoights engraved into their soul), Illusion Creation (Can instantly put opponents into an illusionary world leaving them defenseless in the real world), Subjective Reality (While on the game it caused normal illusions in the Isekai world it has become buffed. Her Fantasy World skill causes all the actions taken by the affected become illusionary, fictitious. Such as running away leading them to move nothing at all and all attacks will never reach the target), Curse Manipulation (Has a cursed bracelet that lowers stats by 30%), Summoning (Can summon spiritual hands of the dead from another dimension), Soul Manipulation (The hands judge the souls of her enemies and attack them or take them with them. She can bind the soul of someone to be her servant with by kissing them with dragon contract), Spatial Manipulation (Can breach a hole in space), Mind Manipulation (Can attack the mind of others), Sleep Manipulation (Can put others to sleep), Statistics Amplification (Via subordination), Statistics Reduction (Via bracelet and dragon wave), Fear Manipulation (Dragon Wave emits a powerful aura of fear that even if resisted it induces weakness and silence unto the opponent), Earth Manipulation (Can create earth golems and manipulate the ground), Power Nullification (Nullifies low-class magic upon contact), Damage Transferal (Bracelet of body substitution automatically cancels a fatal attack once), Resistance towards Fear Manipulation, Statistics Reduction, and Mind Manipulation (Quite easily resists the effects of other dragon's dragon waves), Illusion Creation, Subjective Reality, Magic, Elemental Manipulation, Statistics Reduction (Freya's tear cancels out debuffs), Precognition, Extrasensory Perception (Abilities that sense and predict danger do not work on her), Power Nullification (Illusionary spells cannot be normally negated once victim to them so it is better to prevent them)

Attack Potency: Wall level, City Block level with low level magic (Vaporized a small lake while trying to hold back her magic), City level with normal magic (Being level 147 she could have easily dispatched of a boss dragon who's level range from 50 to 100 and are as massive as an mountain, this all while having her stats reduced by 30%)

Speed: Hypersonic+ (Can cover several miles in what would only be only be one step)

Durability: Wall level, City level with Twilight Embrace (Her defense is equally as low as her attack power as she would be an all rounder if it wasn't for her disproportionally high agility.)

Standard Equipment: Twilight Embrace- The pitch black dress natch wears is a legendary item that absorbs damage for Natch along having some other special qualities.