All Fiction Battles Wiki
Register
Don't have an account?
Sign In
Advertisement
in: Characters, Video-Game Characters, Game Bosses,
and 20 more 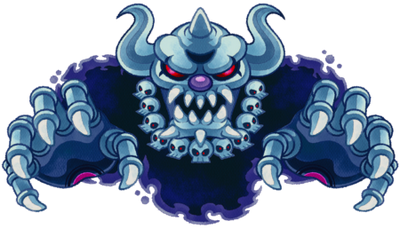 Necrodeus is the primary villain of Kirby Mass Attack and the leader of the Skull Gang hailing from the Necro Nebula, serving as the boss of that area, and as the final boss of the game. He is responsible for splitting Kirby into ten smaller copies, in order to more easily destroy him.

Classification: God of Death, Leader of the Skull Gang

Powers and Abilities: Superhuman Physical Characteristics, Flight and Spaceflight, Energy Manipulation and Projection, can Duplicate others (With Magic, he is able to make weaker duplicates of those who he duplicates), Transmutation and Size Manipulation (as seen here), Existence Erasure (can make the targets dissapear which results in their deaths), Telekinesis, Life Creation, Teleportation

Attack Potency: Multi-Solar System level (Duplicated Kirby into 10 weaker copies of himself, which Necrodeus then fought and ultimately lost against)

Speed: Massively FTL+ (Was able to duplicate Kirby before he managed to dodge and keep up with Kirby himself and his copies)