All Fiction Battles Wiki
Register
Don't have an account?
Sign In
Advertisement
in: RWBY, Characters, Female Characters,
and 24 more 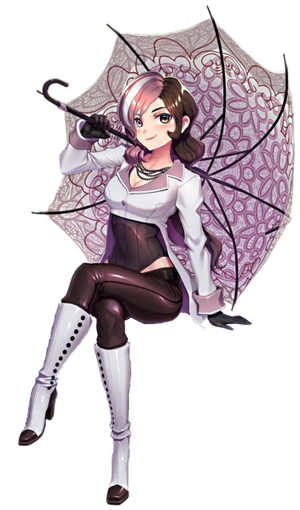 Neopolitan, also known as Neo, is an associate of Roman Torchwick. Later partnering up with Cinder Fall after Roman's death, in order to get her revenge on Ruby.

Powers and Abilities: Superhuman Physical Characteristics, Regeneration (Mid-Low; aura can heal the user when they receive large wounds, leaving no scars), Aura (RWBY), Aura and limited Soul Manipulation (She manifests her soul in the form of life force to create a shield around her and it's directly connected to her life), Forcefield Creation (She has a shield around herself at all times), Statistics Amplification (She can increase her striking power with her aura), Enhanced Senses (Aura can enhance the users senses), Illusion Creation (Via Overactive Imagination, she can create physical illusions), Teleportation (Via Overactive Imagination, she can teleport to her illusions), Shapeshifting (Via Overactive Imagination, she can fully change her own form and even other objects such as vehicles), Vehicular Mastery (She is able to drive and fly many different vehicles), Weapon Mastery (Type. 1, she's a master in the Bartitsu, capable of beating Ruby), Martial Arts (Type. 4, she's one of the most skilled hand to hand combatants in all of RWBY, she was able to fight Yang so well, that Yang couldn't even hit is once and she could take on Cinder who was trained by Salem and also defeated Ozpin, she also was beating Ruby for all of their fight), Precognition (Type. 1, she's been able to prepredict many people's attacks and will begin to dodge them before the person starts the attack such as when she avoided a kick from Cinder before she even began to kick), Acrobatics (Neo is one of the most acrobatic character when it comes to hand to hand, as she'll be thrown and be able to remaneuver herself to land and immediately attack off of the throw or being able to grab Yang and spin around her head then launching her into the ceiling), Stealth Mastery (She's very skilled in stealth being able to infiltrate the Atlas Aircraft and taking control of it or sneaking into the Schnee home tricking even Team RWBY), Resistance to Heat Manipulation and limited Ice Manipulation (Aura protects the user from sub-zero temperatures, allowing them to walk through a blizzard in casual clothing or be encased in ice without being cold, as well as extreme heat up to and including the heat of flames, being blasted with steam, and being submerged in lava without being burned), limited Soul Manipulation (Aura can protect from aura enhanced physical attacks).

Stamina: High (She's superior to all of Team RWBY and can fight Cinder even enough to push her to use her Maiden Powers)

Semblance: Overactive Imagination: Neo is capable capable of creating physical/solid illusions in her field of view.