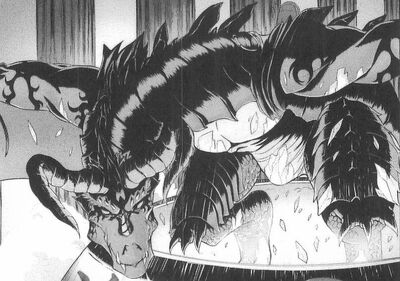 Peterhausen is a main character of Ichiban Ushiro no Daimaou. He's a dragon, revered by the Black Magicians as the God of Freedom, who served the old Demon King before taking Akuto as his new master.

Powers and Abilities: Superhuman Physical Characteristics, Magic (Is the magic source of all Black Magicians), Fire Manipulation, Metal Manipulation (Can fire a metal rod carved with a spiral that is about a meter long), Large Size (Type 1; 15 meters long), Cosmic Awareness (He is a Dragon who is functionally similar to a god, so he can log into the knowledge of every human who acknowledges him), Air Manipulation (Can create tornadoes), Resistance to Poison Manipulation (Unaffected by Fujiko's drugs) and Heat Manipulation (His body composition protects him from the heat of plasma)

Attack Potency: Building level (Equal to Act 2 Akuto Sai and Act 5 Hiroshi Miwa) | Universe level+ (Connected directly to Suhara and thus should be the same as The Computer Gods)

Speed: Subsonic (Should be equal to Act 2 Akuto) | Immobile (Is unable to move while connected to the god tree)

Lifting Strength: Class 50 (Should be equal to Act 2 Akuto)

Durability: Building level (Tanked Act 2 Akuto and Act 5 Hiroshi's attacks) | Universe level+ (Should be comparable to that of the gods)

Stamina: As a dragon who was created to have functions equivalent to a god, he possesses an immense mana reserve. | After connecting to the god tree, Peterhausen took over Suhara's domain, becoming an infinite mana source for the followers of Suhara.

Weaknesses: None notable | Will die if Suhara's terminal is destroyed

Key: Base | Connected to the God Tree