All Fiction Battles Wiki
Register
Don't have an account?
Sign In
Advertisement
in: Characters, Female Characters, Monsters,
and 46 more 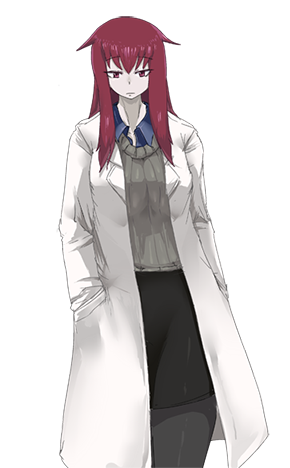 Promestein is an angel from the 9th circle, who originally worked as a clerk for Heaven’s library. Even though she was taught that Ilias is responsible for the creation of everything in the universe, the young angel was still determined to find the truth behind all things in creation. While her work was considered heretical by her society, she was still mostly left alone until the day where she gave fire to human, which caused her to be banished to Earth in a small cave. However, not even that was enough to stop her thirst for knowledge, as she continued her research in this small cave.

Years later, Ilias sent Black Alice to free and recruit her to take part in the world’s “Recreation”. Under the guise of genuinely helping her Goddess, Promestein actually planned to overthrow her, alongside Black Alice. Over the course of the years, she built thousands of Chimeras and recruited many fellow truth-seeker in her close circle, the “Seekers of Truth”.

Superhuman Physical Characteristics, Self-Sustenance (Types 1, 2 and 3), Higher-Dimensional Existence (Holy magic composes half of Chaos, which is the existence that spawned all of space-time from itself and has been implied to be part of space-time’s structure), Nonexistent Physiology (Type 2. Holy Magic composes half of chaos, which represents the non-existent void that existed before space-time itself, and that explicitly predates all concepts. Beings made out of holy magic are unable to be interacted with, even through Monster Lord’s Cruelty’s space-shattering and existence erasing effects), Regeneration (High-Godly. Can regenerate from being reduced to nothingness by Angel Halo), Non-Physical Interaction (Can interact with other angels and damage ghosts), Immortality (Type 2, 3 and 5), Longevity, Magic, Healing (Can heal herself or others), Light Manipulation, Holy Manipulation, Plant Manipulation, Absorption (Can absorb other beings), Flight, Power Nullification (Can nullify attempts at reflecting or absorbing attacks with all of her holy attacks), Hair Manipulation (Can extend and weaponize her hair), Resurrection (Can resurrect her allies), Electricity Manipulation, Status Effect Inducement (Can inflict various status effect), Fire Manipulation, Statistics Amplification (Can increase her or her ally’s HP for the length of a battle), Acausality (Types 1. Can survive having her own timeline erased), Soul Manipulation (Can send one’s soul to Heaven), Death Manipulation (Can force death on her opponents through Tafel Anatomy), Matter Manipulation (Can force a change of phase and create a variety of reactions), Biological Manipulation (Can disasemble creatures made via genetic engineering), Poison Manipulation (Can spread poisonous gases), Plasma Manipulation, Explosion Manipulation (Can force nuclear reactions to occur and cause nuclear explosions), Resistance Negation (Can negate resistances to fire via Nuclear or resistance to darkness via Page 99999 of Oblivion), Transmutation (Can transform matter into objects through alchemy), Mind Manipulation (Can force the opponent into submission with the Page 24 of Obedience), Earth Manipulation, Air Manipulation (Zylphe allows her to control the wind, such as creating weak wind barriers or increasing her own speed), Attack Reflection (Can reflect magic), Statistics Amplification (Can increase her own speed through Sylph), Enhanced Senses (Can detect any disturbances within the wind, down to the smallest insect moving)

Void Manipulation (Can weaponize chaos, which is nothingness itself and erases anything it enters in contact with. It can even erase ghosts and angels), Chaos Manipulation, Conceptual Manipulation (Type 2. Can erase abstracts like the Spirits. Created the Four Artifical Spirits and planned to destroy the four original ones), Information Manipulation (Can cause the local space-time to get overloaded with information, redacting speech and then erasing the surroundings), Sealing (Can seal even Goddesses like Ilias with the Six Ancestor’s Great Seal), Power Nullification (Can potentially nullify all angels’ non-corporeality), Transformation (White Rabbit transforms her into a stronger form)

Lifting Strength: Immeasurable (Made out of holy magic, which is implied to be part of the universe’s space-time structure) | Immeasurable

Stamina: High (Does not need to sleep or eat. Comparable to her Angel Timeline self. Survived for centuries with little to no food or water in a cave)

Range: Extended melee range, hundreds of kilometers with magic (Comparable to other types of magic capable of creating earthquakes), up to Multiversal+ with technology (Sealed up and potentially replaced the Four Spirits, who exists all over the universe. Sealed Ilias. The Six Ancestors’ Great Seal sends its victim’s body in a separate subspace and could keep someone sealed even across universes)

Intelligence: Supergenius (Discovered nearly all domains of science, including quantum physics all on her own, with simply what she could create with Alchemy and what stumbled upon her prison in a cave, despite living in an otherwise medieval world. She went on to go much further in her knowledge after this. Even when she was much younger, she was able to read and understand hundreds of lines of information scrolling quickly through a screen)

Standard Tactics: Whenever it is possible for her to do so, she will aim to use her most powerful technology to bring down the opponent, including the Six Ancestors' Great Seal. Although her fighting tactics without her technology and without an ulterior goal are mostly unknown, she would most likely fight in the most efficient and quick way, considering her personality

Weaknesses: Weapons similar to her nature can physically interact with her. Somewhat overconfident. She lost her Angel Properties after becoming half-monster

Key: Base | With Technology